Cephalopods, especially octopuses, have large, complex, functionally differentiated brains.  They can learn, perform complex visual and tactile discrimination, play, show complex defensive and aggressive responses, and all sorts of other interesting and highly variable behavior (Jennifer Mather's review of cephalopod behavior is good reading for those who are interested.)  Notably, this behavior is unusual among molluscs, who tend to be scavengers or filter-feeders instead of mobile, active predators.

My point is that octopus behavior reminds me a lot of vertebrate behavior and not very much of, let's say, the behavior of clams or sponges, which seems to be mostly limited to sifting for food, moving about to find a better spot to anchor themselves, and mating by ejecting sperm into the water.  Their brains are organized in ways that are reminiscent of vertebrate brains, notably in their memory systems and visual processing systems (see my earlier post on the Octopus visual system for a better, though still brief, treatment of this topic.)

These facts about cephalopods are part of what originally piqued my interest in them.  The study of the similarities and differences between vertebrate and cephalopod neural systems is intriguing to me because vertebrates and cephalopods are presumably very, very distantly related, evolutionarily speaking.  Cephalopod and vertebrate nervous systems have been evolving independently from rather rudimentary beginnings, and have somehow ended up having not only somewhat similar capabilities but also apparently similar organization and mechanisms, even at complex levels of information processing.  I have a strong feeling that there is something important to be learned about the evolution and development of nervous systems from the study of cephalopods.

Following this line of reasoning, it's important to understand just how cephalopods (part of the phylum mollusca) and vertebrates (of the phylum chordata) are evolutionarily related.

The last common ancestor between vertebrata and mollusca is though to have existed at least 550 million years ago (most probably more), around a time referred to as the Cambrian explosion.  It's called that because drastic evolutionary differentiation occured during a short time, resulting in the evolution of many of the taxons that we know today.  This ancestor was the "urbilaterian", or the last common ancestor of all of the bilaterians.  Bilaterians are animals who have a bilaterally symmetrical body plan - not that their bodies are always symmetrical (just look at the flounder), but their body plan is.

This organism (or a similar one - it depends on who you ask) is also called the protostome-deuterostome ancestor (PDA), because it is thought to represent the last common species before the divergence of the deuterostomes (whose gut grows from their anus inwards, basically) and the protostomes (whose gut used to be thought to grow from the mouth inwards, but is now know to develop in a few different patterns.)

There is a slight technical difference between these terms, with the "urbilaterian" being the last common ancestor of all of bilateria, and the "PDA" being the last common ancestor of only the deuterostomes and the protostomes, but not of the few other small phyla that are also included within bilateria.  Despite this, it is not known how to differentiate the two possibilities, nor how they would affect the probable attributes of such an organism.  Although the "missing link" that would characterize the relationship between cephalopods and chordates should be technically referred to as the PDA, the authors of the papers I cite use the term "urbilaterian", and so I will stick with this.

It might seem like a stretch to purport to study something that hasn't existed for hundreds of millions of years and that we can never unambiguously identify.  Nevertheless, we can know what features the urbilaterian must have had by looking at those features that are common to all Bilateria.  This is apparently done using genetic and genomic techniques (which I am admittedly not very familiar with - here I am trusting the authority of the cited authors and their citations.)  Erwin and Davidson, in a review titled The Last Common Bilaterian Ancestor (2002) make the argument that one of the important conserved elements of bilateria are genes that regulate cell differentiation - that is, certain cell types (which presumably will later allow the evolution of certain morphological structures) are already present in the urbilaterian and are conserved throughout bilateria.  The examples cited by Erwin and Davidson are (possibly among others): photoreceptors, neurons, intestinal-secretory and neuro-secretory cells, cardiac-type and striated muscle cells.  Also conserved across Bilateria are a variety of regulatory genes that determine how the expression of genes the cause cell differention occurs during an organisms development.  Most of the variation within bilateria is therefore constructed by these (approximately) common cell types and regulatory mechanisms.

So, based on our current understanding of comparative developmental genetics and morphology, the urbilaterian looks something like this: 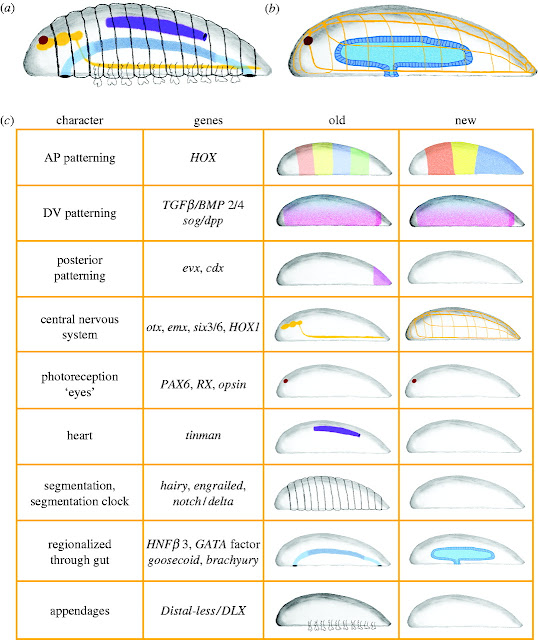 (Figure is from Acoel development supports a simple planula-like urbilaterian by Hejnol and Martindale, 2007.)  This hypothetical little guy has a central nervous system; although, Hejnol and Martindale argue, it's likely that it is primarily net-like rather than based around a centralized ganglion.  Notably, it has photoreceptive cells (essential for the evolution of eyes) and epidermal sensory cells.  It also has striated and smooth muscle cells, and the nervous apparatus to use them both.  It has a blind gut (meaning that its food intake and waste output use the same cavity) with specialized secretory cells, no appendages, and no body segmentation.  In short, although it looks very simple, it contains all of the building blocks to make the huge diversity of lifeforms we have today, as well as all those that have evolved from it and since become extinct.  These are listed, in part, in the chart in the bottom half of this figure, showing the genes implicated in the differentiation of conserved body features along with a diagram of where they are expressed in two different hypothetical bilaterial (the right being the one supported by the authors.)

So, this is the point of the story:  if we understand humans well, and we understand other species (including cephalopods) well, then we might be able to determine what features of each are likely to be due to inherent constraints in all bilaterian biological systems, and which have evolved more through more open-ended mechanisms.  From this, we could learn very general rules about how bodies grow and develop, and of specific interest to neuroscientists, how complex neural circuits are wired up.  This would bring us a huge step closer to understanding brains in general, as well as our specific human brains.
Posted by Mike Mike at 10:13 PM