I've been reading M. J. Wells' book "Octopus", one of the "classic" works on the octopus.  It was published in 1978, and is an essentially complete review of research on octopuses (primarily O. vulgaris, the common octopus) up until that time.  It must have been fun to write the book, because he had done much of the research he cites (he cites at least 45 of his own papers in the book.)

Wells has published a large number of experimental studies on octopuses, and I've become very interested in his series of experiments dealing with the sensory capabilities of the octopus.  In this series of posts (there will be 3 or 4, I anticipate, over the next week or two) I'll relate his findings, as well as others, about the sensory systems of the octopus.  Forgive me if I write brief posts, as I'm rather busy writing other things at the moment.

I'll jump right into the octopus visual system.  It's a good place to start, I think, because it's relatively easy for us to imagine what it's like to see, and so to think about octopus visual perception by analogy.  It's relatively harder to imagine what it's like to control eight boneless arms (just like it's hard to think about what lateral line perception is like in fish - we simply do not have the anatomy to do it.)  We'll move on to other senses in the next few posts.  For now, though: vision!  (For a brief look at the anatomy of the octopus visual system, check out my earlier post on that topic.)

Vision in octopus has been studies mostly through the technique of visual discrimination tasks.  Simply put, an octopus is taught (via food rewards for correct answers and/or electric shocks for incorrect answers) to attack one visual stimulus and not another.  The visual stimuli are then varied, and it can be discovered what stimuli the octopus can discriminate between.  If two shapes are not discriminated between, they can be said to be perceptually identical (or at least perceptually similar) to the octopus.  These experiments were widely done (well, as widely done as anything in octopus neurobehavioral research) throughout the 1950's, 60's and 70's, with some research still going (albeit at a slower pace and with shifting foci) today.

Octopuses, it turns out, can see pretty well.  They can reliable learn to discriminate a variety of shapes, and can even tell the difference between rectangles that are identical except that one is rotated through a small angle relative to the other.  An interesting deficit showed up after a variety of experiments were carried out, however - Octopuses are unable to recognize the difference between certain mirror images!  For example, an octopus does very poorly when discriminating between two diagonally oriented rectangles, even though they are perpendicular to each other.  This result is not too surprising, as this is the case to a greater or lesser extent with many vertebrates (to whom the octopus is often compared in its sensory abilities.)  It is, however, remarkable in its extent - it seems like a big deal not to be able to make such a discrimination at all.

In any case, these experiments gave theorists of visual perception a lot of things to think about (I'll write about their theories later in the series.)  What I find interesting about the whole series of experiments, however, is that they laid the groundwork for the investigation of the role of statocysts in octopus visual perception.  Statocysts in cephalopods are like the vestibular systems in our ears: they are tiny, fluid filled chambers that contain hair cells which detect the movement of this fluid (see The Fine Structure of the Octopus Statocyst (1965) by V. C. Barber for a more complete description.)  It appears that the main function of the statocysts is to help the octopus maintain its equilibrium by detecting changes in velocity as well as the direction of gravity.  For example, an octopus whose statocysts have been surgically removed will move unsteadily and fail to make normal eye movements in response to the movement of its environment.

Under normal conditions, an octopus will keep its pupil slit horizontal, relative to the pull of gravity.  However, when the statocysts are removed, the octopus will no longer be able to do this; her pupils will be fixed relative to her body position, and will not adjust to remain horizontal.  This is a figure from Proprioception and Visual Discrimination of Orientation in the Octopus (1960) by Wells, showing this effect: 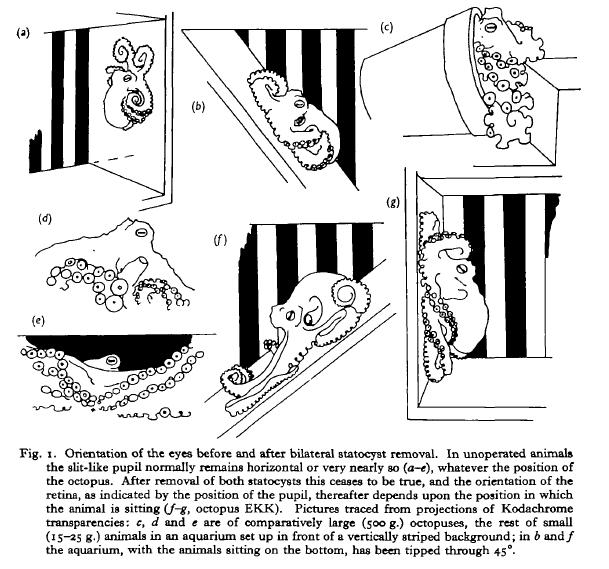 So what happens when you test these octopuses on orientation discrimination tasks?  It turns out that they can no longer discriminate between differently-oriented bars.  This is a big deal, because it can tell us something about the way that the visual system of the octopus processes shapes.  Specifically, it reveals that there is something important about the orientation of the retina that makes it possible for the octopus to discriminate shapes.  When the octopus cannot keep its retina level, it cannot discriminate between long shapes and tall shapes.  Thus, we know that the circuitry processing visual information in the octopus is relying on the input from the eye always being in the same orientation.

This can be contrasted with the way that people (and probably other vertebrates, although I don't know this for sure) determine orientation in their visual field, which is determined partly by non-visual cues but also largely by the presence of some sort of horizon line in the visual field (see A Horizontal Bias in Human Visual Processing of Orientation and its Correspondence to the Structural Components of Natural Scenes (2004) by Hanson and Essock for a neat demonstration of this.)  If there is no available horizon line, orientation is gathered from other parts of the context, such as common or known objects.  This means that in humans, even when the orientation of retina is perturbed, the visual processing system can use what it knows about the visual environment to adapt to the new orientation.  As long as the input is otherwise normal, it doesn't matter which way the retina is turned - that is, one can still make orientation discriminations when one's eyes aren't on the level.

This might seem puzzling or maladaptive on the part of the octopus, but a little thinking about the visual ecology of humans and octopuses reveals that it's perfectly sensible.  Octopuses, living in the ocean, don't often have very clear horizon lines or reliably-oriented objects around them.  Their strongest clue about orientation is the pull of gravity.  People, living on land, have reliable horizon lines almost all the time, so they can take advantage of this to orient themselves.  In addition, octopus eyes have muscles that can rotate the eyeball around any which way relative to the body - human eyes do not.  Octopuses never needed to evolve the complex orientation-correcting systems that vertebrates did, because they can just hold their eyes level.  They can, in a sense, afford this apparent deficiency in their visual processing system, because they compensate for it easily.  If this was the case with people, every time we laid down, bent over, or leaned to one side, the world would be full of novel objects that we couldn't make sense of!

I hope this was informative.  I can't wait to write the next one, about octopus touch and proprioception.  See you next time!