Ethology is a discipline that I have been enamored of ever since I first discovered it.
The field started with the studies of animal behavior by Konrad Lorenz, who was interested in "instinctive" behaviors in a variety of species, most of them birds (for a good review of history, see http://apophenia.wdfiles.com/local--files/start/tinbergen.pdf). The goal of ethology is stated in a deceptively simple way: to study the behavior of animals. It seems to me to straddle the junction of zoology and psychology, studying behavior from the perspective of animal biology, much as biological psychology studies human behavior in reference to human biology.

The basic structure of an animal's behavior is referred to as an ethogram. Ethograms have been developed for a wide variety of species.  These are essentially attempts to create a complete catalogue of a species' behavior.  Ethograms can be quantitative (that is, quantify how much an animal does each activity in its repertoire) or merely descriptive.  In some commonly used laboratory species (take the rat, for example) ethology has been largely left by the wayside, due in part to a focus on generalizing experiments to human psychology or biology. This appears, to me, to be very unfortunate, as we risk losing our perspective on what the behaviors we study mean to the animal performing them.
For example, consider the classical learning experiments in rats that use the lever press as an operant response. Ethologists would never have tried to study learning in the rat using a lever-pressing behavior. Rats, if left to their own devices, simply do not tend to press levers! More recently, nose-poking (a very common and easy thing for a rat to do) has gained some popularity as an operant response, and has made this research much easier to conduct as well as more flexible. Knowing the behavioral repertoire of an animal is a prerequisite to understanding any particular behavior in that animal, let alone using it to draw inferences about behavior across species.

I didn't bring up ethology just to rave about it, though. I've been reading a number of cephalopod ethograms, and wanted to spread them around. Ethograms are interesting to read because they provide a snapshot of a species - they provide some understanding of its biology, its ecology, and its psychology, all in one.
In Ethogram of Abdopus aculeatus (d'Orbigny, 1834) (Cephalopoda: Octopodidae): Can behavioural characters inform octopodid taxomony and systematics?, Christine Huffard lays out an ethogram of Abdopus aculeatus, a species of small octopus that lives in indonesia (for videos and a press release on her findings, see this link)  In this press release, she mentions how much of our information about octopus behavior comes from a few, rather old sources, and not a diverse and current range of ethological studies, as one might hope for.  I find this to be frustratingly true - when you look at the literature on octopus behavior, it seems like many experimental biologists quickly jumped on the octopus as a system to study something (vision, motor control, learning) largely without taking to trouble to investigate and re-investigate its behavior in ecological conditions.  The sources that exist on this topic are mainly books, not journal articles - both less accessible and less stringently peer reviewed.  Huffard's articles are like a breath of fresh air in the world of octopod behavior.
Here's a few pictures of the pretty little guy: 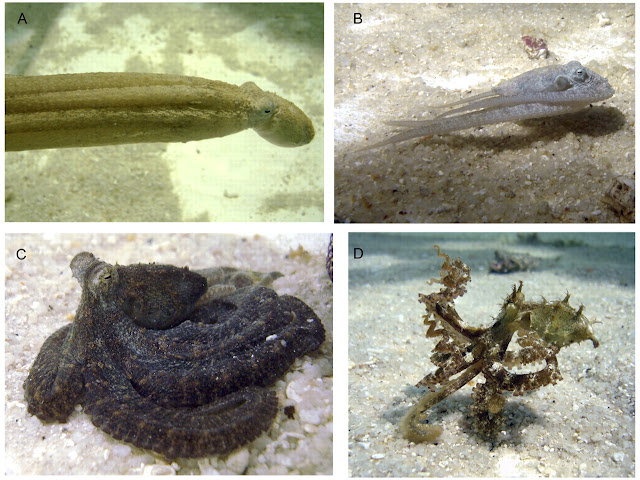 (Figure 2 from Locomotion by Abdopus aculeatus (Cephalopoda: Octopodidae): walking the line between primary and secondary defenses (2006), also by Huffard.  The supplementary material for this paper also has a few good videos of A. aculeatus moving about.)
Now comes the big question:  what did the study find?
Well, the study does a very good job answering the question: what does this animal do?  Huffard found that A. aculeatus is diurnal, both mating and foraging primarily during the day.  Like other octopuses, they forage using mainly their tactile sense (although sometimes visually,) groping the substrate to locate prey.
A. aculeatus shows a great variety of body patterns, including really impressive papillae (bumps on the skin that can be made larger or smaller as part of a body pattern) and a variety of color patterns, mainly used for camouflage.
Perhaps the most striking findings are about the social and sexual behavior of  A. aculeatus.  Octopuses are known for being solitary creatures, but Huffard describes the presence of specific male-male aggressive interactions, usually in the presence of a female.  Sometimes, it even appeared that one octopus would try to strangle its opponent by "[wrapping] one arm around the mantle opening of another individual, presumably cutting off ventilation."  It was also found that males actively guarded their mate females from other males, whom they often mated repeatedly with over a few days.  This is in contrast to the relatively simple meet-and-mate behavior that has been described in other octopus species.
Huffard ends the paper with a discussion of the use of skin components and other behaviors to clarify octopus systematics.  She makes the argument that O. cyanea shows certain behavioral similarities to A aculeatus, as well as being closely phylogenetically related, demonstrating that behavior can inform phylogeny.  While this is suggestive that behavior might be useful in classifying organisms, I think that it remains to be seen whether this is a reliable way to do it (at least, more reliable than molecular phylogenetics, upon which her argument appears to rest.)  The case for this seems like it would fall prey to the problem of convergent evolution, as it appears relatively easy to evolve nearly identical behaviors and morphologies independently, but harder to evolve identical nucleotide sequences independently.  Frustrating this issue, she mentions, is the fact that there are no published ethograms for cogeners of A. aculeatus.
Thanks for reading!
Posted by Mike Mike at 12:10 PM