Notes on the Argonaut 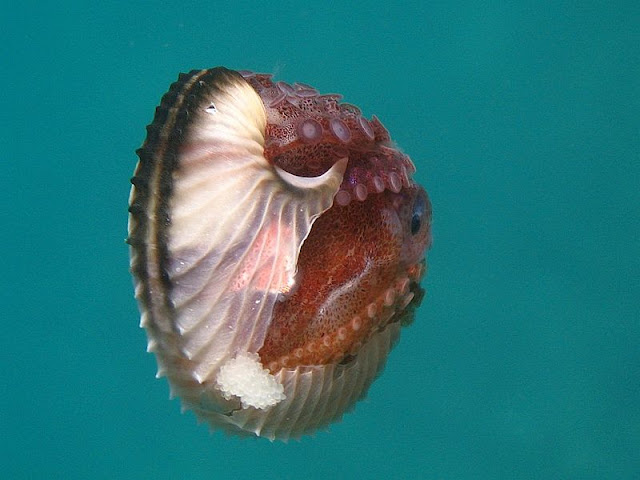 (Photo by Bernd Hofman.)
One of my favorite parts about reading the research on any topic is reading very old research on that topic.  Today, I came across this paper on the argonaut, Notes on the Argonaut (1869), by W. H. Dall, published in The American Naturalist, volume 3.  The argonauts are a neat genus of pelagic octopods (Argonauta,) the females of which secrete a thin shell from specialized areas on their arms (pictured above in ecological conditions, inside the shell, and drawn below without the shell.) 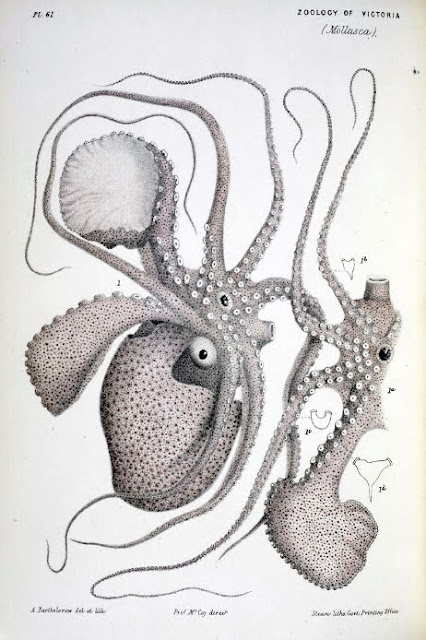 (Lithograph by Arthur Bartholomew, ~1870)
Almost 150 years ago, this guy put together a pretty good description of argonaut behavior, although it was brief.  Reading his work renews my faith in the power of good old observation, as well as flowery phrasing in otherwise dry writing.  For example, Dall comments on the argonaut's sexual dimorphism, with a healthy dose of Victorian sexism:
The Argonant shell is formed, curiously enough, by the females only;
as among more highly organized beings sometimes, the gentler sex
outshine their brothers in the splendor of their apparel, and the
extent it occupies. Unlike many, however, the Argonaut toils not,
neither does she spin.
The last sentence of that quote is genuinely confusing to me.  What exactly does he mean?  What evidence is there that argonauts do not "toil"?  What does it even mean for an octopod to toil?  Without being accustomed to the zoological vernacular that Dall is writing in, it's hard to get what he means by this.
Another gem is his description of argonaut mating habits.  Unlike today's biological authors (fortunately or unfortunately, it's your call,) Dall doesn't shy away from anthropomorphism:
When the tender passion seizes him, as he rocks on some sunny wavelet,
far from female society, he does not go in search of a wife, but with
Spartan courage, detaches one of his eight hands (or arms) and consigns
it to the deep, in the hope that some tender hearted individual of the other
sex will fall in with it and take it under her protection. Thus for a long time
the male Argonaut was unknown, the arm (which does not die when
detached, but lives an independent worm-like life) was, when found in
the gill-chamber of the female, supposed to be a parasite, and was called
Hecto-cotylus.
Interestingly enough, although this name was given to the organ because it was thought to be a parasite, the modified arm that octopus and squid use to mate is still called a heteroctylus.
In closing, Dall acknowledges the unique contributions of one Madame Jeannette Power (a pioneer of the use of aquaria) to the study of the argonaut with a quaint tone of amazement:
It is pleasant to add that our first detailed account of the Argonaut and its
development, was published by a lady, Madame Power, who made her
observations in the Mediterranean, having a sort of marine enclosure
made, where she kept these animals and observed their habits from life.
I know this was a short one.  I couldn't help it - I can't resist dusting off a few of the old chestnuts in the scientific literature and reveling in my own fantasies of some lost scientific world, where it's considered adequately professional to use the term "tender passions" when describing the behavior of a mollusc in a leading biology journal.
Thanks for reading!
Posted by Mike Mike at 1:51 AM