For several years, a group of researchers in France have been studying the neural correlates of learning in cuttlefish (recently focusing on, among other things, oxytocin-like neuropeptides in the cuttlefish CNS - I'll review this in a later post.)  I reviewed some of their work in an earlier post.  Although this is a fascinating concept, their method has been criticized because they use a single learning task to elicit what they claim are learning-induced neural changes, generally.  Importantly, it is questionable whether their method causes associative learning or habituation.  Associative learning involves the formation of a mental or neural (depending on your conceptual preference) association between some behavior and a consequence of that behavior, such as finding food or feeling pain.  This form of learning has long been thought of as one of the hallmarks of adaptive behavior, and it is certainly central to any claims about cephalopod intelligence - if we could not demonstrate associative learning in cuttlefish, we would have very little ground on which to call them intelligent.  Habituation occurs when we are exposed to some stimulus for long enough that we just stop responding to it.  In the case of habituation, we haven't learned much about the stimulus - simply that it is generally unrelated to any reward or punishment we might get.
So what is this controversial procedure?  The group has given it the obscure name of the prawn-in-the-tube procedure.  It is essentially what is sounds like.  A cuttlefish is presented with a prawn enclosed in a clear plastic tube.  Cuttlefish, being visual predators, will attack the prawn, but their tentacles will hit the tube, and their attack will fail.  Over subsequent presentations, they learn not to attack the tube.  The difficulty is that it is hard to tell whether the cuttlefish are simply habituating to the prawn-in-the-tube stimulus, or whether some sort of sensory feedback from failed attacks is causing them to suppress their attacks - a type of associative learning known as passive avoidance learning.
In this group's research on cuttlefish learning (as well as in an older line of research by J. B. Messenger that used the same procedure) it is vital to know what sort of learning they are inducing in order to interpret their results.  Specifically, they work under the assumption that their procedure induces passive avoidance learning.  This is a pretty big assumption.  As such, they decided to settle this problem with a series of experiments, which they published as The “prawn-in-the-tube” procedure in the cuttlefish: Habituation or passive avoidance learning? (2006) by Agin, Chichery, Dickel, and Chichery.
This study uses two techniques.  The first is called dishabituation.  In these experiments, a strong competing stimulus is presented alternatively with the "habituated" stimulus.  If this elicits a greater response, the it is likely to be the case that the animal has habituated rather than learned by association.  If the response is still suppressed after the novel stimulus is presented, it must be that the familiar stimulus is repressing behavior, and that passive avoidance learning has taken place.  The logic is that the effects of habituation will decrease if the animal becomes generally aroused by some other stimulus.  Their results show, however, that this is not the case.  Novel stimuli did not dishabituate the cuttlefish to the prawn-in-the-tube assembly.  Strike on against the habituation theory.
The second test that they used involved showing the cuttlefish a piece of bait (a live prawn,) and then removing it from the tank as the cuttlefish attacked, preventing them from ever catching it.  In this test, the cuttlefish never received any sort of tactile feedback when they attacked.  If the prawn-in-the-tube procedure causes habituation, we would expect attacks to decrease in this condition, as there is no reward or punishment to shape the behavior.  If the prawn-in-the-tube procedure works mainly by passive avoidance learning, we would expect that, as there is no negative sensory feedback following unsuccessful strikes, the cuttlefish would not change their response at all during this version of the procedure.  As it turns out, the procedure was almost completely ineffective in inducing any sort of learning in this condition.  The cuttlefish continued to strike regularly at the prawn, and their latency to strike actually decreased.  This experiment clearly does not support the habituation hypothesis.  Strike two!
Where's the third strike?  Oh, yeah, Purdy et al found similar results using a variation of this procedure in their paper Prawn-in-a-Tube Procedure: Habituation or Associative Learning in Cuttlefish? (2006).  Strike three, and the habituation hypothesis is out!
Actually, these results could presumably be overturned by some more sensitive or definitive test in the future.  For the moment, however, these studies allow the cuttlefish memory research community to investigate the neural bases of memory in the cuttlefish with a reasonable amount of certainty that they are studying associative learning.  They also make a nice general point about the sort of fine-grained analysis that's needed in order to study complex psychological processes like learning and memory, as well as emphasizing the importance of being critical of the assays that one uses to study these things.
Thanks for reading! 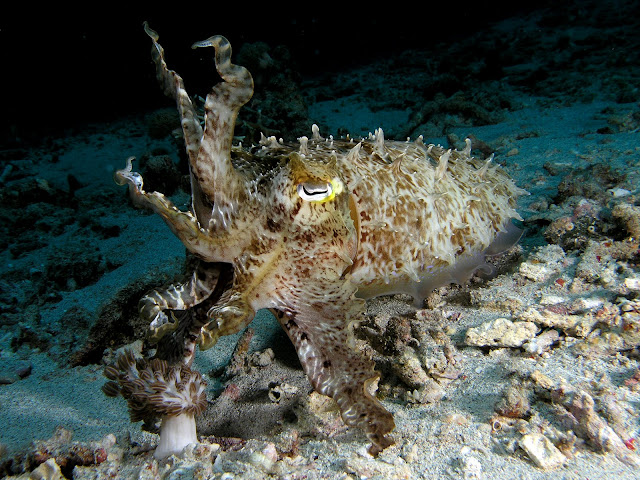 (Sepia apama.  Photo by Nick Hobgood, used under a Creative Commons license.)
Posted by Mike Mike at 11:51 AM