A View of the Octopus Brain.

In this post, I am going to outline octopus neuroanatomy, to the best of my ability.  It's a complicated subject that I am only beginning to have a grasp on, but I want to post more about specific research papers regarding cephalopod brains, so I figure I should review this first.  Let's get right to it. 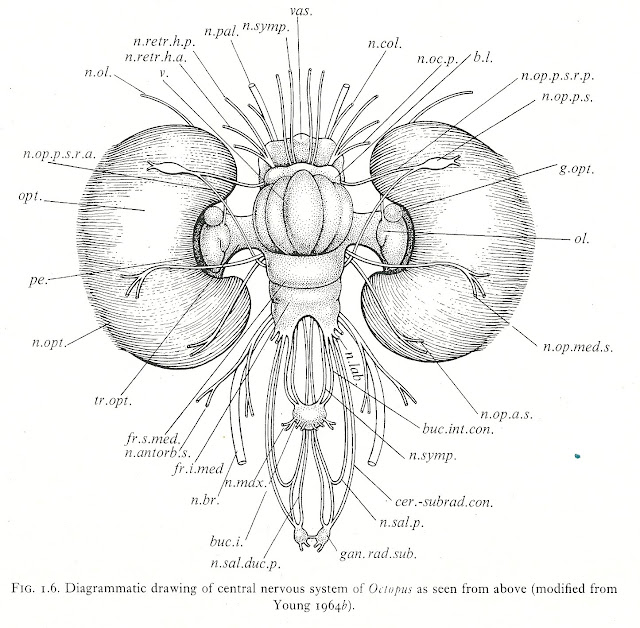 This figure is from J. Z. Young's "The Anatomy of the Nervous System of Octopus Vulgaris" (1971, which I was fortunate enough to come across recently.  If you're familiar with looking at mammalian brains (like me,) you'll be utterly lost.  This is a view of the octopus brain from above - imagine that the octopus is lying on a table, it's mantle away from you and its tentacle towards you, it's eyes looking longingly into yours.  Its brain would be oriented as shown.  The two big swellings on either side are the optic lobes, which sit just underneath the eyes.  The rest of the octopus brain is wrapped around the esophagus.  The brachial nerve (labeled "n.br." and seen towards the bottom of this figure) travels out to innervate the arms (more precisely, we might say, to connect the nervous system of the head and the nervous system of the arms, which is hugely complex in its own right.)  See this diagram of octopus general anatomy to get an idea of the size of the brain relative to the octopus's body, as well as the nervous system of the arms. 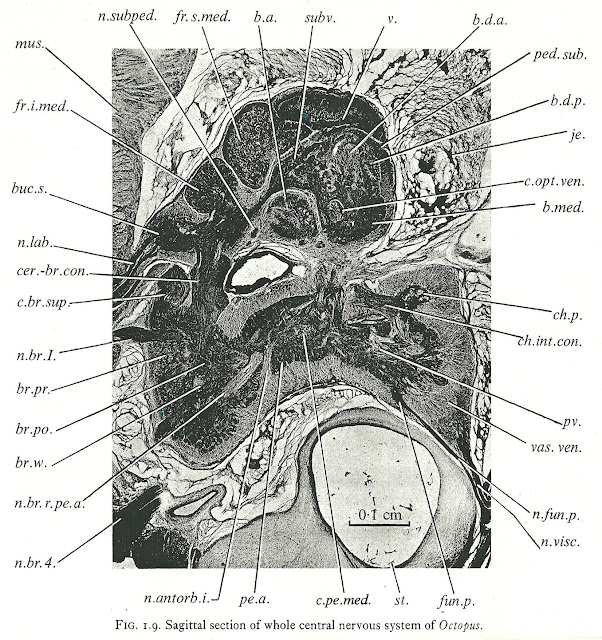 This is a figure from the same work showing a section of the octopus brain from the side.  In this figure, the mouth and tentacles would be off to the left, with the mantle off to the right.  The big white hole in the middle of the brain is at the level of the oesophagus, although I'm not sure if it is actually the oesophagus in this section.  The brain is thus divided into supraoesophageal and suboesophageal masses (the former being above and the latter below the oesophagus.)  This image does not include the optic lobes.
While the octopus brain is smaller than that of birds or mammals when adjusted for body weight, it is still a highly-developed, centralized brain with specialized substructures within it.  Within the next few weeks, I'll try to cover some of the research that has been done to map the functionality of the cephalopod brain, as scant as it is in comparison to the literature on mammalian brains.  For now, though, I'll go through it briefly.
It is misleading, actually, to focus only on the brain if we're trying to understand the nervous system of octopus - most of the neurons in an octopus (roughly 2/3 of them, actually) lie in the nervous system of the arms, which is thought to control some aspects of movement with little input from the brain.
Young divides the octopus brain into 5 functional areas: Lower, intermediate, and higher motor centers, receptor analyzers, and memory centers.  We'll go through them all briefly.
Lower motor centers are those which contains the neurons controlling muscles directly.  These neurons effect muscle contraction, and so make possible the movement of the animal.  These are analagous to some neurons in human motor cortex, as well as those in the spinal cord.  In the octopus, these are located in the nervous system of the arms.
Intermediate motor centers (located in the anterior suboesophageal mass in the pre- and post-brachial lobes (br.pr. and br.po.), as well as others) coordinate movements between the arms in a way that is beyond that of the lower motor centers.  These areas are comparable to some neurons in mammalian motor and premotor cortex that, when stimulate, produce complex patterns of movements, but which generally fall short of that seen when an organism is behaving freely.
Higher motor centers, located (for example) in the basal lobe (b.l.) control complex behaviors that involve the animal's whole body.  I am not sure that these have a parallel in the mammalian brain, but my guess is that it would lie somewhere in premotor cortex, coordinating the activities of the motor units further down the chain of command.
Receptor analyzers are those parts of the brain that interpret incoming information from sensory receptors.  Notable, in the octopus, they include the optic lobes (opt.) which analyzes incoming visual information, and the buccal system (buc.s.) which analyzes information from touch receptors in the arms and buccal mass (the area at the convergence of the arms, where the beak is located.)  The mammalian brain has lots of these as well, for example the inferior and superior colliculi, which analyze incoming auditory and visual information, respectively.
Last, but certainly not least, are the memory centers.  The memory system in octopus (and in cuttlefish, as I'll post about later on) is distributed among the superior frontal (f.sup.med.), vertical (v.), and subverticle (subv.) lobes, as well as the buccal system, and the inferior frontal (fr.i.med.) lobes.  J. Z. Young has made the argument that the organizations of this system show analogy to circuits in the human hippocampus (see Computation in the Learning System of Cephalopods, 1991).  I do not know enough about the two systems to agree or disagree with him at this point, but it is an interesting idea, nonetheless.
I hope this has been as informative for you as it has for me!  You can count a few more posts on memory research in cuttlefish soon.
Posted by Mike Mike at 6:27 PM