In this post, I'll be talking about octopus tactile sensation.  M. J. Wells and J. Z. Young did the classic experimental work on touch discrimination and learning in the octopus, although a bit of recent work has been done on the neurochemical basis of touch learning in the octopus (which I won't get into here.)

We'll focus on Tactile Discrimination of Surface Curvature and Shape by the Octopus (1964) by Wells.  This was one of his later papers in a series on tactile learning in the octopus.  Prior to this paper, Wells had already determined that octopus do not use proprioception to discriminate between objects (as a blindfolded person might do when trying to feel what an object is with his hand,) but rather use (almost exclusively) tactile cues about the object's shape.  Let me explain.

It had been found that a blinded octopus could discriminate, on the basis of touch, between a sphere and a cube.  This could be explained by the presence of some sort of proprioception that monitors the relative position of the octopus's arms in space - a system like this is known to exist in most vertebrates.  However, Wells carried out a series of experiments that show that this is, if anything, a very subtle factor contributing to the octopus's ability to perform tactile discriminations.  He found that octopuses learn to recognize the corners of a cube as variations in texture, which are encoded in reference to the extent that the suckers contacting the object are deformed.  For example, a sucker that is on the corner of a cube will wrap around the corner, bending itself along a sharp angle.  This information is encoded as some sort of distinct textural component, and sent along to the brain where it can interact with learning centers (which I'll discuss in a later post, hopefully) that will allow the octopus to remember what a particular texture means.  Thus, if you teach an octopus to respond to a cube (meaning that you reward it with food when it grabs the cube, and punish it with electric shock when it grabs another object, say, a sphere,) this theory would predict that it would also respond to any object which induces a similar deformation of the suckers that contact it, such as a rectangular prism, or a thin rod.  This is called a transfer experiment, because it tests the extent to which a learned task transfers to situations other than the one it was learned in.  Indeed, Wells found that he could substitute a thin rod for the cube, and the octopus will respond to it as if it is a cube, presumably because the suckers contacting the rod are bent into a relatively sharp angle, as are those contacting the edges of the cube.

This evidence alone didn't quite clear up the question of how octopus performed touch discriminations, though - specifically, Wells' experiment with the cube, sphere, and rod did not use enough variations of form and dimension to really probe the mechanism of touch discrimination.  Thus, Wells decided to conduct a number of transfer experiments between differently sized and textured cylinders in order to figure out the characteristics that octopuses use to identify objects by touch.  The stimuli he used are shown here: 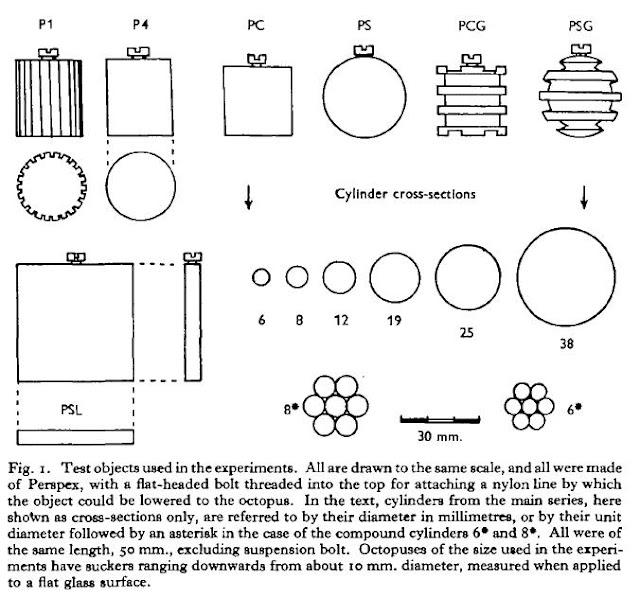 The numbers under the cylinder cross-sections indicate their diameter in millimeters.  Wells notes that the octopus he is working with have suckers that are 10mm or less in diameter.  Knowing this, one can gauge the approximate deformation of a sucker that the different cylinders would produce.  For example, a 6mm wide cylider would induce a significant curvature in the sucker, whereas the 38mm cylinder would produce a very slight curvature, and thus would appear essentially "flat" to the octopus, if Wells' theory is correct.

Wells quantified this difference, and generally found that the greater the difference in curvature between two cylinders, the easier the discriminate was.  This is great, but it doesn't rule out the proprioception theory.  What if the octopus was actually "feeling" the position of the arm as it bent around the cylinder?

To solve this problem, Wells used the two cylinders shown at the bottom of Figure 1, those labeled 8* and 6*.  These are "composite cylinders" were made of 7 small cylinders attached together, parallel to each other.  If the sucker-distortion hypothesis is correct, then these objects should be treated as equivalent to small cylinders, because they create equivalent deformation of the suckers contacting them.  If there is some mechanism that determines the shape or position of the grasping arm as a whole, then they should be treated as equivalent to the large cylinders, as they would require the same arm position and curvature to grasp as the 24mm and 18mm "simple" cylinders, respectively.  In fact, this is what Wells found, although the experiments with compound cylinders did not adhere quite as closely to his proposed model regarding differences in curvature as did those with the simple cylinders.  This might be expected, as the actual curvature experienced by the suckers is more variable with a more complex object.

Wells tested his idea further, by offering already trained octopuses P1 (which was grooved) and P4 (which was smooth.)  Other than their texture, these objects did not differ at all.  If sucker deformation is the basis of discrimination, we would predict that P1 feels most like a small-diameter rod to an octopus, as it would deform the suckers touching it greatly.  P4, on the other hand, would feel like a large-diameter cylinder, because, well, it is.  In fact, this is what Wells found - octopuses who were trained to take the larger diameter cylinder transfered this learning to the P1/P4 discrimination, and tended to take the smooth one.  Animals who were trained to take the smaller diameter cylinder tended to take the grooved one.

Wells goes on to consider discrimination using a cube with rounded corners (which proves difficult for an octopus) and a cube/rectangular prism discrimination (which is also difficult,) but I'll let him tell you about those, as the point is amply made already.

What about the neuroanatomy of this system?  Wells provides us with a figure showing the cross-sectional structure of a single sucker, including the receptors that putatively monitor mechanical distortion of the sucker (in the area labeled "2" at the rim of the sucker, towards the bottom of the diagram. 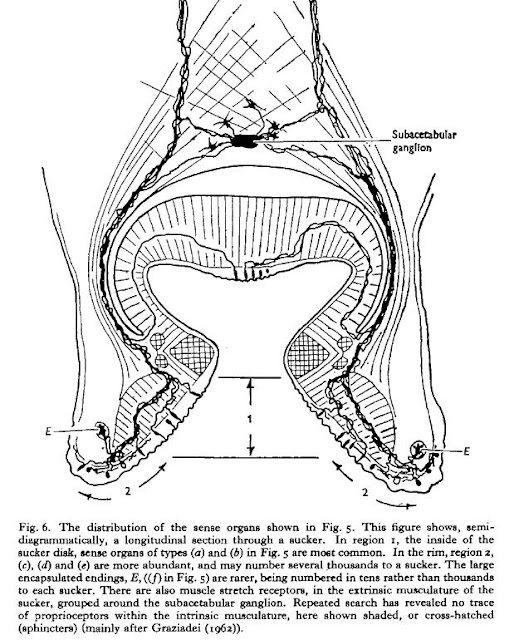 These receptors detect the mechanical forces from the object deforming the rim of the sucker, and then send this information to the ganglia of the arm.  It seems likely (although I don't know that it has been tested) that these mechanoreceptors don't send their information the whole way to the central nervous system, but rather input into some processing system in the nervous system of the arms first.  It would be interesting to know the minimum number of steps that information from the suckers might go through before it gets to the brain, because this would give a rough idea of how "processed" the sensation is before it gets to brain areas involved in learning.  J. Z. Young's "Anatomy of the nervous system of Octopus vulgaris" didn't seem to have a clear answer for this question, so for the time being, I'll assume that it's unanswered (though, if I'm wrong, please point me to the literature.)

All in all, this might seem like a poor way to distinguish two things from each other.  When you keep in mind the fact that octopus can't discriminate objects based on weight, either, even though it can adjust its posture and muscle tone to hold a heavy object, it would seem that the octopus has a sort of crappy tactile sensory system.  We should ask, then: what does the octopus use this for?

When octopuses hunt, they often use a "blind" foraging strategy.  They will pounce on an area where prey is likely to be with their arms and web spread open and then feel for prey.  Alternatively, in rocky areas, an octopus might feel around in cracks for prey items.  If the octopus feels a prey item, she grabs it, moves it towards her mouth, and eats it.  It seems likely to me that the sort of touch discrimination that Wells trained octopuses with is not anything like what is demanded of them under ecological conditions.  For one, it is likely that octopuses are sensitive to movement as well, as they must be able to discriminate between rocks and prey, both of which might be similarly textured.  While hunting, an octopus also has other sensory systems to rely on.  They're not primarily visual predators, but they can be, spotting prey and then attacking it (as they do when shown a live crab in an aquarium.)  They also probably have chemoreceptors on their arms which could help them identify objects under their web.  It doesn't seem to me as if lacking proprioceptive input to the central nervous system is at all a deficit to the octopus in its natural habitat.