I'd like to take a minute to talk about chromatophores.  These are the pigment organs that allow cephalopods to change their color and body pattern, like this pretty little guy is doing: 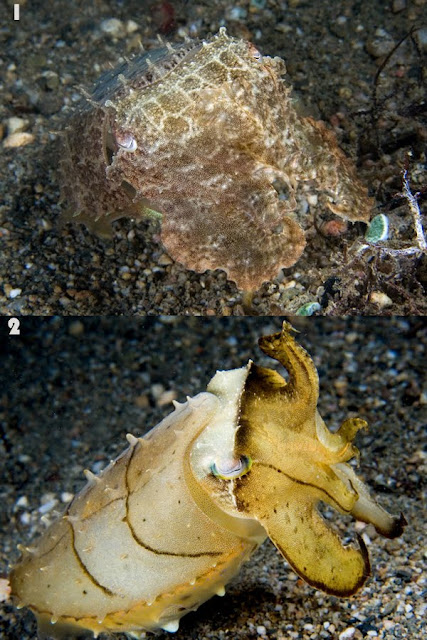 Neuroscientists (at least some of them) seem to get pretty excited about cephalopod chromatophores, because they are neurally controlled instead of hormonally controlled - this makes them unique among chromatophores, which are found in a wide variety of animals including fish, reptiles, and some invertebrates.  Each of a cephalopod's chromatophores is innervated directly, which allows it to change color quickly to make a huge variety of patterns.  Besides allowing cephalopods to exhibit remarkable color-changing behavior, chromatophores give us a chance to study a unique neural system whose operation probably sits somewhere between autonomic or reflexive activity and voluntary control, and which has no clear homolog in vertebrate neurvous systems.

Chromatophores themselves are interesting structures.  They consist of a central area of pigment surrounded by radially organized muscles.  When these muscles contract, the chromatophore widens from its usual contracted state.  By coordinating the movement of the muscles of many chromatophores, cephalopods can create a variety of body patterns.  Here is a diagram of the organ:

When one considers that even a small cuttlefish has hundreds of these organs, all controlled via neurons emanating from the central nervous system, the chromatophore system and the behaviors it makes possible become very impressive.

In Peripheral innervation patterns and central distribution of fin chromatophore motoneurons in the cuttlefish Sepia officinalis by Gaston and Tublitz (2004), the authors present data illustrating the pattern of innervation of chromatophores in the fin of cuttlefish.  What they find is that the fin nerve is highly branched and innervates the fin muscles and chromatophores in an apparently efficient manner.  Here is a photograph of their preparation, showing the branching fin nerve: 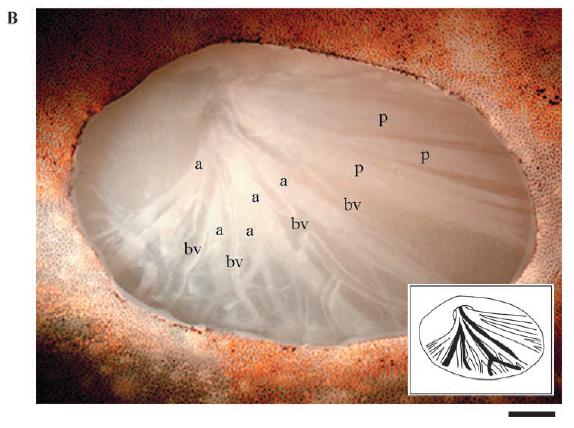 While this is cool, I'm more concerned with their findings regarding of the source of the neurons that innervate the chromatophores.  The authors used a method called retrograde labeling to investigate this.  In this technique, nerves are dyed somewhere in the periphery (in this case, the fins), the dye is given time to fill the whole neuron, and the it can be located in the central nervous system by slicing the brain and looking at it microscopically.  Gaston and Tublitz found that most of the neurons innervating chromatophores originated from the posterior suboesophageal mass (in the following image, found towards the bottom right - one of the lobes of the posterior suboesophageal mass, the pallidovisceral (pv.) is labeled.)  This is perhaps not surprising, because it has been known since Young's work in Octopus in the 1960's that much of the innervation of the mantle organs and musculature arises from the posterior suboesophageal mass.

The cuttlefish brain is pretty similar to the octopus brain in its organization.  The following figure is a sagittal section of a cuttlefish brain and buccal mass from "The Brains and Lives of Cephalopods" by Nixon and Young (which is a wonderful book, by the way.)  In terms of orientation, the mouth is to the left of this figure (the beak and lip are labeled,) the supraoesophageal mass is towards the top of the image, and the suboesophageal mass is towards the bottom of the image.  I like this image because it situations the brain in the context of the larger structure of the head of the cuttlefish.

Although there is a growing literature on the subject, there are still lots of questions to be asked about chromatophores.  I would personally love to see more research on the representation of the skin's surface within the neural system controlling the chromatophores.  It would be neat to see if somatotopy was present, and in what forms.  Also, the possibility of the systems that control chromatophores working as part of some sort of generalized stress- or motivation-related system is very interesting to me.

For the interested reader, here are some other free, full-text resources on chromatophores:

Thanks for reading.  See you next time!
Posted by Mike Mike at 9:44 AM