Visual neuroscience is one of my favorite sub-fields of neuroscience.  As such, I've decided to write this post about the visual system of Octopus (I will leave out squid and cuttlefish for this post, but theirs are, overall, pretty similar.)
First, let's take a look at the anatomy of the octopus eye, in comparison to a more familiar specimen (this figure is from Ogura et al., 2004): 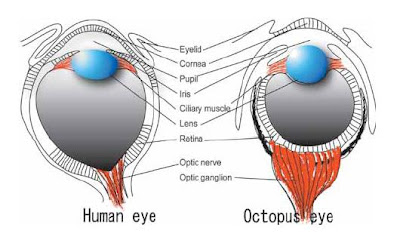 They look pretty similar, don't they?  Notably, the both have lenses to refract light, a pupil to restrict incoming light, a retinal surface distributed along the back of the eye, and a well-differentiated optic nerve.  There are, however, a few notable differences.  Firstly, octopus eyes and human eyes focus light on the retina in different ways.  Humans bring their eyes into focus by changing the shape of our lenses using the cilliary muscle.  Octopuses, on the other hand, focus by moving the lens closer to or further away form the retina.  This is the same way that a camera focuses, and so people often refer to cephalopod eyes as "camera eyes."  Secondly, the octopus retina is very different from the mammalian retina in terms of its cellular organization.  Let's look at an octopus retina first (From Young, 1962). 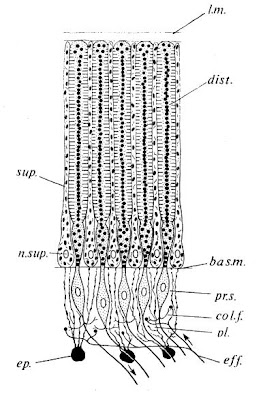 Light enters the eye from the top of this image.  In terms of cellular organization, the limiting membrane (l.m.) at the top of the figure faces towards the front of the eye, with the basal membrane (bas. m.) towards the back of the retina.  The distal segments (dist.) of photoreceptors face the front of the eye, and the proximal segments (pr. s.) sit at the back of the retina, from which they send their projections through the optic nerve to the optic lobes where further processing of visual information takes place.
To compare, let's check out a few diagrams of the mammalian retina (both of these are taken from Wassle and Boycott, 1991 ; the first is their own drawing, and the second is by Ramon y Cajal, one of the early geniuses in neuroscience): 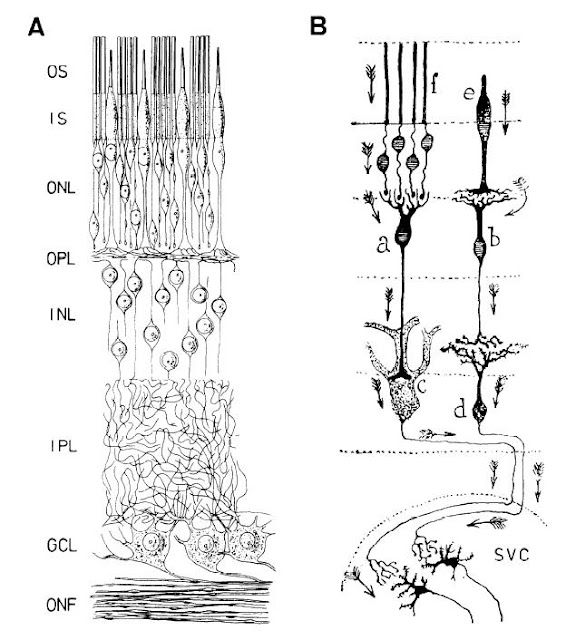 Now, you wouldn't know this from looking at the figures, but the mammalian retina is actually opposite in orientation from the cephalopod retina.  That is, light enters from the bottom of these drawings, and passes through several layers of cells before reaching the photoreceptors at the back of the retina (the photoreceptors in these images are rod-like structures at the top of the images, labeled as "OS" and "IS" (for "outer segments" and "inner segments", respectively) and as "e" and "f" in Cajal's drawing.)
You, being a smart and inquisitive reader, might just now be asking, "what is all that other stuff doing in our retinas?"  It turns out that it processes the information that photoreceptors gather about patterns of light right there in the retina.  By the time retinal ganglion cells (labeled "GLC" and "c" or "d" in the two images) leave the mammalian retina, they are already carrying information about properties of the visual environment, such as where isolated, high contract areas of light are and what the overall level of illumination in different areas of the visual field is.  This information can then be used by visual processing centers in the brain to very efficiently form a picture of the visual world, including identifying objects and movements.
At first glance, it looks like the octopus must miss out on some visual processing power because it does not have this visual processing system intrinsic to the retinal.  It makes up for this, however, in a very interesting way.  Let's look on this drawing of the organization of the octopus optic lobe - the place in the brain where the octopus optic nerve ends up (this image is from Young 1961): 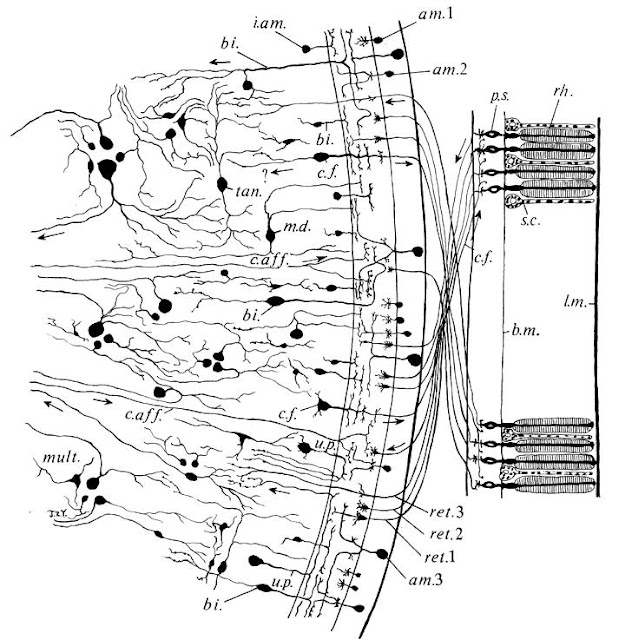 Young makes the argument, in this paper, that the outer layers of the octopus optic lobes (which are nestled right under the eyes and directly innervated by the retina) are likely to have the same function of the complex layers of the mammalian retina, with the deeper layers analagous to mammalian central visual processing areas.  As far as I know, there has been no direct test of this hypothesis.  However, it is an interesting and (at least circumstantially) sensible idea, and it must be the case that octopus forms perceptions of objects and movements are some central location - after all, it does have rather good vision.  The optic lobe, after presumably making sense of what the retina is saying, sends projections all over the superoesophageal mass of the brain.
Why does this matter?  Who gives a bibble?  Well, the evolution of the eye as long been used as a sort of model evolutionary system, that is, we can probably use it to understand evolution, and to determine what principals of genetic selection drive evolution.  It's suitable for this for a few reasons: we have extant animals with a variety of types of eyes, we have extant animals with no eyes, the eye is relatively accessable and easy to study (and so the eyes of mammals and insects has already been extensively studied.)  As a discrete organ, it is also a relatively straightforward task to characterize morphological and cytoarchitectural variation between species.  In addition, the visual system is interesting to study because it is one of the few systems that we can understand and model on a fine-grained computational level.  Thus, the differences between cephalopod and human eyes are important because they can not only tell us things about how our eyes work, but help us figure out the way that evolution works.  Evolution, as we know, is important to understand because it is, quite literally, the reason we are here.
It seems that there is probably an optimal organization to any visual processing system that involves progressive layers of increasingly synthetic processing of incoming visual information (for example, the progressive abstraction of visual input in humans from light to features, and then to objects and scenes.)  This point is strengthened by the fact that insects appear to share this style of processing visual information, albeit with anatomical differences (for more information on insect visual processing, see this paper).
I had wanted to talk about the vestibular system of cephalopods in this post as well, but it's already lengthy and I need to get going.  I'll do a post on it another time.
Thanks for reading!
Posted by Mike Mike at 5:43 PM