Today I’ll review the earliest Octopus behavioral research study I could find (that is, except for a few very old papers in French, that I shamefully do not have the skill to read, although I am working on translating a few of them, bit by bit.) This is a study by Paul Schiller published in the Journal of Comparative Psychology in 1949, titled “Delayed Detour Response in the Octopus”. It’s a very early experiment on the ability of octopus to apply detours to a learned task (that is, you teach the animal to go somewhere for a reward, usually food, and then you put a barrier in its way. Depending on the character of the animal’s “intelligence”, it may or may not be able to successfully pass the barrier to get the reward.) If you have access to scholarly databases, you can probably get ahold of it (I got mine for Scirius, and I think Ovid has it as well) – unfortunately, I can’t link to a free .pdf of the article here.


Interestingly, Schiller begins his description of his methods by describing a procedure that does not work with octopus:

The conventional technique of using two inverted cans, one covering a baited, the other
an unbaited container, both of them previously exposed to the vision of the octopus, was
tried on 4 animals with rather discouraging results. Both cans were attacked and lifted indiscriminately
or, if not far enough from each other, simultaneously. This happened often
even in the preliminary stage when the covering cups were transparent. The tendency to
crawl in or lift up the containers was so powerful that the animal did not regard the bait at
all unless specifically trained to do so.

This makes a lot of sense – it turns out, as shown in this and later experiments on octopus, that their top performance in response-selection tasks is somewhere around 70-80% correct responses. They are “curious” enough that they will choose to investigate the “wrong” stimulus regularly. This makes sense for a foraging, active predator, who is more successful if they inspect many new areas of their environment than if they are entirely predictable. 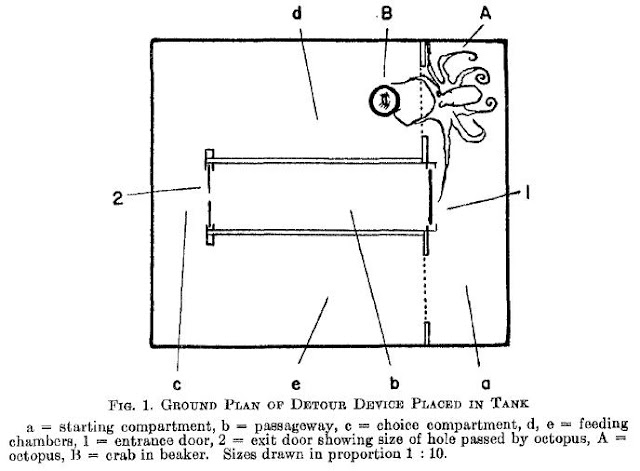 Shown in this figure is the apparatus he settled on. The octopus is confined in the starting compartment and allowed to investigate a crab in a beaker through a screen. Then, the entrance door is opened, and the octopus learned to move through the opaque corridor to receive the crab. It was found that, after learning this, Schiller’s octopuses made 75% correct responses – well above chance (which is 50%, in this set-up.) Furthermore, Schiller found that the longer it takes the octopus to get through the corridor, the worst its chance of being correct. He also finds that, using a female whose reward is returning to her nest instead of a crab, that disorientation of her body posture by making her crawl through a small hole destroyed her ability to make the correct choice in the delayed detour task:

It seems, with this one animal now under the more powerful motivation of her
nest instead of food, that a delay of at least one minute does not interfere with
the correct choice. The same amount of delay, however, if it involves disorganization
of the bodily posture while in locomotion, prevents a successful delayed
choice. There is no need to assume central representative factors for the delayed
detour performance which, in the octopus, may be mediated by locomotional
cues.

Basically, although we can explain detour performance in (for example) rats by showing that they probably have some flexible internal representation of the test space (see Tolman's discussion of cognitive maps for more information,) it appears that this same ability in octopus can be explained by intervening postural and sensory cues, without recourse to more complicated cognitive processes.

Thanks for reading!
Posted by Mike Mike at 12:51 PM