I was the Pittsburgh Zoo today, and had the opportunity to watch their resident Pacific Giant Octopus (Enteroctopus dofleini) being quite active.  After moving about for a while, it balled up and sat on the glass, and I noticed an interesting behavior.  The animal would wave the tips of its arms around in the water for a moment, and then drag them along the glass in towards its mouth, until they almost touched its lip (that is, near the confluence of its arms.)  My armchair theory about this was that this was some sort of chemical sampling of the environment; however, there doesn’t seem to be any good evidence for this on a cursory search of the literature on octopus olfaction (if you know of some, please point it out to me!)  I did, however, find a neat paper that addresses the effect of olfaction on octopus eating behavior.
The paper is Chemical Stimuli and Feeding Behavior in Octopus, Octopus vulgaris by Anraku et al (2005).  A free full-text version is available here.  I like this paper because it uses a very clear (though limited) behavioral coding scheme to quantify what would otherwise be an impossible-to-quantify set of behavioral sequences.  It's a very good example of methodologically solid behavioral research on a non-traditional laboratory animal.  Let’s get on to it, shall we?
In this study, the authors (who worked, as is somewhat typical in the field of marine biology, at an institute concerned with commercial fisheries – something I have issues with, but which does not invalidate their research) presented octopus with cellulose bait pellets soaked with different putative olfactory signal chemicals.  Then, the amount eaten was measured (as a metric of the attractiveness of the food), and the octopuses’ behavior during the bait presentation was coded.  The general design of the study is illustrated in the first figure of the paper:

I love this figure.  It does what too few papers bother to do: make their experimental design crystal clear at the outset of the paper.
The behavioral coding scheme the researchers used is as shown in this figure: 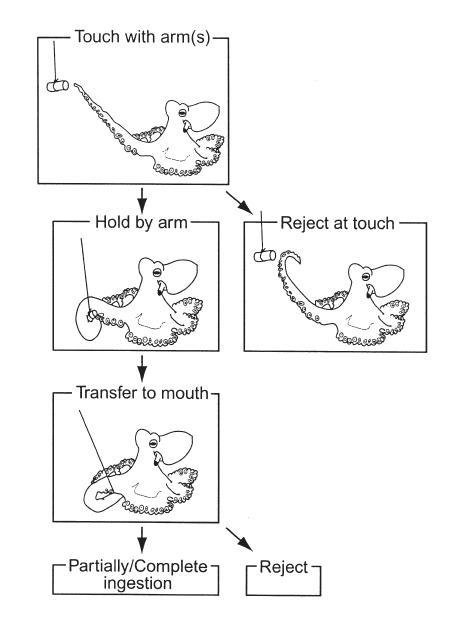 Their results are basically as follows: octopuses often (63% of the time) showed “positive” consumptive behavior towards the bait pellets with no added olfactory cue.  Among a variety of chemicals tested, fish extract was found to significantly raise the probability of consumptive behavior (to 88.5%) while squid ink (but not octopus ink) was found to significantly decrease the probability of this behavior (to 10%.)  Octopus ink did, however, significantly decrease the amount of the pellet eaten relative to controls.
This study shows that feeding behavior in the octopus is at least somewhat mediated by olfactory cues.  What I would like to see investigated more is the way that olfactory cues from other octopuses (such as ink) might influence behavior; the authors mention that squid have been shown to increase escape behavior in the presence of other squid’s ink.  It may be that octopus use similar social cues, either to signal positive or negative aspects of the environment or to mediate encounters between octopuses.  Maybe somebody is already working on this problem, and I simply haven’t found that research yet.  In any case, I think it would be interesting.
Thanks for reading!  If anybody has any good information of octopus olfaction that they'd like to share, please do!
Posted by Mike Mike at 4:37 AM