This will be a quick one - I'll get back to the meat of my series on octopus sensory systems soon, but I wanted to write a post on this article because it struck me as cool (although it has a sort of sensational title.)

The authors used an apparently elegant experimental design to test whether octopuses can tell people from one another across a long period of time  - specifically, this is operationally defined as meaning that they could learn an association between a person's features and a good or bad stimulus.  The experiment was conducted thus:  eight octopuses were captured and habituated to their aquaria.  Then, for 2 weeks, the octopuses had daily interaction with two people, one of whom fed them and one of whom (I'm not joking) poked them with a "bristly stick" (more specifically, "a length of PVC pipe with one end wrapped in Astroturf.")  Then, the octopuses were tested to see if they reacted differently to the two individuals - presumably, if they remember who is who, they should show anticipatory behaviors related to eating or defensive behaviors in response to the appropriate person.

To get a better feel for the task, here are the experimenters, shown in an image taken from the octopus's point of view: 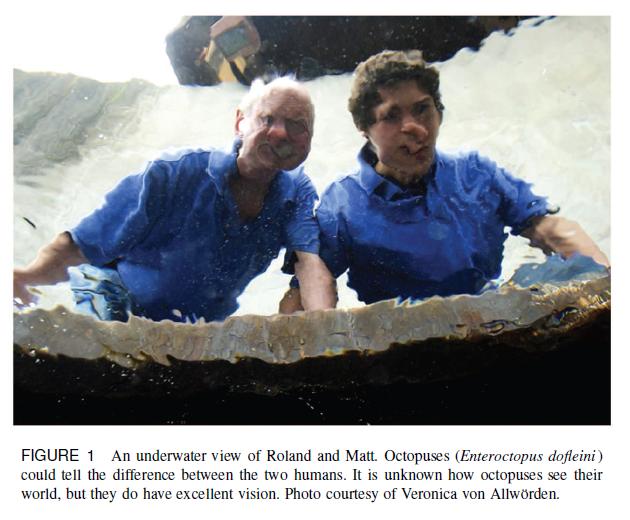 My problem with this experiment is that the term "individual" is usually used in cognitive research to mean some entity who is known to persist despite changes in their appearence in one specific sensory modality.  When we get a haircut, our friends (and, usually, our pet dogs and cats) still recognize us - thus, we are individuals to them.  However, if the visual stimulus of the two keepers didn't change from day to day (and they took pains to make sure that it didn't,) then this seems like little more than a complex visual discrimination task.  It seems, judging from this image, that it would be pretty easy for an octopus to learn an association between, say, a shiny bald head and being jabbed with a stick, regardless of any ability she might have to recognize "individuals" in the cognitive sense.  In any case, we are still a ways away from knowing whether octopuses can recognize individuals, and not just their constant visual features.  With this in mind, let's consider their results.

It turns out that the octopuses learned to move away from the irritator and towards the feeder within two weeks.  In addition, the octopuses showed fewer defensive coloration responses to the feeders than to the irritators, as well as changes in their respiration rate and the orientation of their bodies relative to the people.  In sum, it looks like (in this test, at least) the octopuses succeeded in learning basic traits about the people interacting with them.  I don't think that the title of the paper is fully supported, however - it's hard to make the case that this single study proves that octopuses can identify individuals in any sort of robust way.

This paper is pretty solid (besides its unfounded title,) although it begs a few questions:

1.  How fine of a discrimination can octopuses make?  Would they treat two bald men of similar stature the same?  What if the subjects wear different clothes?  How is this piece of research fundamentally different from Wells' experiments using simple visual cues? These are all important questions if we're actually going to claim that octopuses can identify "individuals" as opposed to simple visual stimuli.

2.  What does this mean functionally to the octopus in the wild?  Is this sort of ability actually used to identify predators and prey items?  Do octopuses remember individuals of any species in the wild?  Unfortunately, there is not much literature on the development of behavior in the octopus, so we can't know how much of octopus behavior is "instinct" and how much of it is based on learning (like that shown in this study.)

3.  How does this generalize to other species of octopus?  This study used Enteroctopus dofleini, the giant pacific octopus, because it is often kept in public aquaria.  However, practically the whole body of research on octopus learning and vision has been done using O. vulgaris and, to a lesser extent, O. cyanea.  We know that cephalopods have a pretty wide diversity of life-styles, so it seems important to me to know how these behaviors occur in different species if findings like this are going to be relevent to the rest of cephalopod research.

If nothing else, this study keeps alive my childish hope that Twister, the resident E. dofleini at the Niagara Falls Aquarium (which I visit almost weekly these days) will someday get to know me, if only in the most basic way.

Anyways, I hope this has been as fun for you as it was for me.  Thanks for reading!