Pass the clams, please: A strategy for object retrieval in the octopus.

I recently blogged about a line of research on octopus reaching movements, but I left out an important study for time's sake.  I promised to cover it promptly, and so I'm making good on that promise here.  To recap:

It has been shown that reaching movements by octopuses are controlled by the nervous system of the arms relatively autonomously from the central nervous system; that is, a severed arm can complete these movements on its own, given the proper stimulation of the base of the nerve cord of the arm.  This is all well and good, as the movements being studied were rather simple, involving the extension of an arm.  This reaching movement was found to consist of a propagating wave of muscle activity down the arm, a solution to the control of such a flexible appendage that greatly reduces the amount of neural computation that is needed to make such a movement.)

The study I'll look at today is Octopuses Use a Human-like Strategy to Control Precise Point-to-Point Arm Movements by Sumbre et al (2006).  In it, the authors study a more complicated movement: retrieval of an object using a single arm.  This is a problem of interest to neuroscientists and roboticists, because understanding how the octopus generates controlled, precise movement using an appendage with so many possible movements might give us some insight into the optimal solution of this problem.  This could help reveal general rules of efficiency in neural programming.

Beginning (as is advisable) at the beginning, the authors videotaped reaching movements in O. vulgaris that were elicited by touching a piece of food to the animal's outstretched arm.  Their observations revealed that octopuses create joints in their arm during this movement, around which they move stiffened segments of the arm much the same way that animals with a skeleton (notably, humans) do.  A series of stills from one of their videos and a lovely diagram of the arm "joints" of an octopus who is about to eat an unhappy-looking fish are shown below: 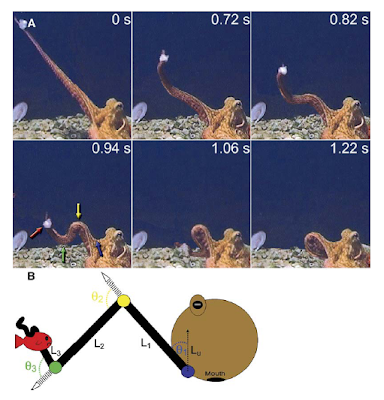 It turns out that most of the distance covered in this movement sequence comes from the arm's rotation about the medial joint (the yellow one), much as most of the effective range of human retrieval movements come from flexion of the elbow.  After some more detailed analysis of the kinetics of this movement (which I'll skip here - but please check out the paper if you're interested) the authors go on to probe the pattern of muscle activity that is responsible for this movement as they did in their earlier studies (for a brief explanation of their methods, see my earlier post; for a longer one, see the paper reference therein.)  They found differences in patterns of muscle activity depending upon where in the arm recordings were being made.  When they looked proximally to the medial joint (eg. in arm segment L1 in the above diagram,) they found that a wave of muscle activity propagated away from the body, as it does in reaching movements.  When they recorded from a portion of the arm distal to the medial joint (eg. in arm segment L2,) they found that muscle activity was propagating in the opposite direction - from the tip of the arm towards the base.

Using these results, the authors offer an elegant explanation of the neural control of this behavior.  They suggest that the initiation of a retrieval movement involves the initiation of two waves of muscle activity, one starting from the tip of the arm and one from the base.  Where these waves meet, the medial joint is formed.  In this way, the octopus nervous system simplifies the problem of finding an efficient way to retrieve an object, a problem which would be hard to solve on the basis of proprioception or neural control contingent on a direct representation of sensory space due to the flexibility of the octopus's body.

In case you were wondering (I sure was), an experiment that was reported in the supplementary material (though it seems pretty important to me) revealed that retrieval could not be elicited in denervated arms in the way that arm extension can.  Therefore, it appears that some input from the central nervous system is required to initiate this more complicated movement, although it is still possible (and seems likely) that, once initiated, the movement is driven primarily by peripheral mechanisms local to the arm performing the movement.  The authors found that ablation of the anterior basal lobe left octopuses unable to initiate object retrieval, confirming its suspected function as a motor center in the octopus.

The authors finally put forth a hypothesis of convergent evolution of reaching movements between octopods and vertebrates:

It is especially surprising that of all possible
geometrical structures and motor control strategies
with which a flexible arm can bring an object to the
mouth, the octopus generates a quasi-articulated structure
with a striking morphological and kinematic resemblance
to the multijoint articulated limbs of vertebrates.
Because the hypothetical common ancestor of cephalopods
and vertebrates dates back to the beginning of
Cambrian era (about 540 million years ago), fetching
appears to be a genuine and rare case of evolutionary
functional convergence, where two independent attributes
(morphology and neural control) coevolved to
achieve a common goal.

I have no particular problem with this hypothesis.  I'd be interested to see if these types of movements are present in other species of cephalopods, both decapods and other octopod varieties.  I think that the case for convergent evolution in this instance will always be a hard sell, because (unlike, for example, the eye) the anatomy of the body parts executing the movement in question are so different.  In addition, the movements studied in this paper were elicited in very specific conditions using octopuses that were trained to extend their arms and wait for food to be pressed to them, leaving it unclear what other types of movements they might make in retrieving an object as well as the relative importance of the aforementioned quasi-articulated arm movements in the ethogram of the octopus.  Those criticisms aside, I'm willing to accept the idea that articulated movement really does represent a good solution to the problem of controlling movement, because it shows up across animalia so often and in so many forms.  Why wouldn't we expect the octopus to get in on the action?