In my recent quest to find new, cutting-edge research on cephalopods, I've come across some neat stuff (check out this post on the perception of polarized light by cuttlefish - it's one of my favorite new cephalopod research topics!)  The study I'll review here is outside of my field of relative expertise, but it's so neat and so new that I couldn't resist writing about it.  It's good to step out of one's comfort zone every once in a while, right?

An international team of researchers hailing from Norway, Australia, and Germany has published a study on the venom of Antarctic octopods (more accurately, it is being published, though it hasn't hit the presses yet.)  The team investigated the biochemical properties of extracts from the salivary gland of four Antarctica octopus species and wrote up their results in Venom on ice: First insights into Antarctic octopus venoms (2010).

Here is their image of the posterior salivary glands of an octopus, from which the authors collected all of their specimens: 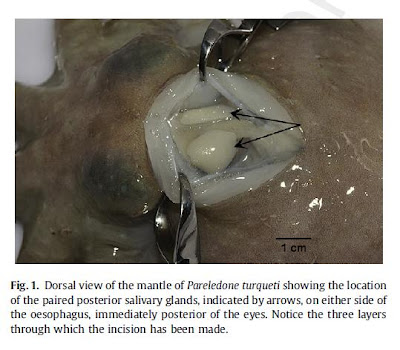 These glands produce a variety of compounds, notably venom and digestive enzymes.  The venom of temperate-water octopuses has been studied in the past.  Never before, however, has venom been studied in an octopus that lives in below-freezing temperatures, conditions under which the enzymes in most venoms work very poorly if at all.  To begin to understand the role of venoms in the lives of Antarctic octopuses, the team collected and tested venom from four octopus species collected off the Antarctic shore: Adelieledone polymorpha, Megaleledone setebos, Pareledone aequipapillae, and Pareledone turqueti.  Here are images of some of their specimens:

Cute, aren't they?  Octopods always are!  Anyways, back to the biochemical assays.

First, the authors tested the extracts for alkaline phosphatase (ALP) activity.  ALP is an enzyme that is in spider and snake venom that is thought to help immobilize prey items.  Second, they tested for Acetylcholinesterase (AChE) activity.  AChE breaks down acetylcholine, a neurotransmitter, potentially acting as a toxin by disrupting neuromuscular function.  Third, the extracts were tested for general proteolytic activity using casein.  Fourth, an assay for secreted phospholipase A2 (sPLA2) was performed.  sPLA2 is found in cone snail and snake venome, and contributes to the effects of venoms in a variety of ways.  Finally, the researches assessed whether the venoms showed haemolytic activity, which is a common marker of the general toxic activity of venoms.  Taken together, these results should begin to characterize the putative venom of each octopus species.  After all of this, the researchers reviewed what is known about the morphology of the mouthparts of the octopuses, as well as their feeding habits, and tried to relate these to their biochemical findings.

So, after all of that, what did they find?  Here are their results(takes another deep breath):

Venom from all of the species had some ALP activity.  Interestingly, however, when ALP activity was tested at 0 Celsius and at 37 Celsius, venom from 3 species of octopus (A. polymorpha, M. setebos, and P. turqueti) had higher ALP activity at the lower temperature!  This is a significant finding because it suggests some sort of modification of the proteins responsible for this activity to function optimally at a lower temperature.  This lends some weight to the theory that the use of venom has been important enough to the survival of Antarctic octopus species that they have evolved enzymes to work under conditions where most enzymatic toxins would not.  In the other tests, an essentially similar pattern of results were found, except for the AChA activity assay.  Little AChA activity was found in any of the species, although the results of the assay were poor enough (that is, inconsistent) that they were not included in the paper.  Interestingly enough, although all of the species had a few potentially functional toxins in their venom, most of them showed only weak haemolytic activity.  Only one extract (from P. turqueti) showed strong haemolytic activity.

The relation of venom activity to morphology and diet that the authors attempted to point out appears to be weak (or at least difficult to point out given their sample,) as it is mentioned that few clear venom-related adaptations in diet or anatomy were present in these octopus species.  A. polymorpha is noted to have a very large salival gland and a narrow beak, which the authors suggest might be an adaptation associated with the use of venom as a primary means of catching prey (as opposed to having powerful jaws to physically overpower the prey.)  This species feeds mostly on amphipods and polychaete worms, and so it's unclear why it would rely on venom to subdue such (relatively) easy going prey instead of retaining a more varied diet.  In any case, though, this is one of those papers that, being exploratory, raises many more questions than it answers - that's the kind I like!

What I find most interesting about this work is that it begs questions about the evolution of octopus venom.  How quickly could the octopus populations move into cold water?  Was this limited by the evolution of venom enzymes, or did that evolution occur after some quicker relocation of the species which left their warm-water-adapted enzymes useless?  Did A. polymorpha's ancestors have a specialized diet before they became Antarctic, or is that only a successful feeding strategy in the Antarctic environment?  The world may never know (although I hope we do, someday!)