I was recently pointed to this article on "octopus intelligence".  I like the article (which features quotes from such cephalopod research all-stars as Roger Hanlon and Jennifer Mather,) although I am a bit let down by the brief, incomplete explanation that is given to the various "intellectual" abilities of the octopus such as "problem solving" and "play".  Both of these behaviors are difficult to define precisely, and are often understood in vertebrates by analogy to human experience.  For example, one of the criteria that is used to define play in animals (as stated in Kuba et al. 2003, a study on play-like behavior in octopuses) is that it is "spontaneous and pleasurable ('done for its own sake')".  This is one of the central features of play - that it appears to serve no other immediate purpose than to entertain or occupy the animal expressing the behavior.  I take some issue with the use of the term "play
to describe octopus behavior, at the very least because the implications of play-like behavior in the octopus are not very well studied yet.  It's much harder to determine the motivational significance of an activity in an octopus than it is in, say, a rat.  This is because we know the brain and behavior of the rat much more thoroughly than we know those of octopuses, and since they are structurally similar to ours we can relatively easily design valid measures of motivation in rats.  In contrast to the vast (though still incomplete) neurological and behavioral description of pleasurable and aversive states in the rat that we have generated, we have only a very crude measure of the possible hedonic characteristics of an activity in the octopus; that is, we can assume that the octopus will do "pleasurable" things and will avoid aversive things, but we have little more to go on when we are talking about the motivation of an octopus.  Because of this limitation, I think that it may be too early to say for sure what processes play-like behaviors in the octopus actually represent, and so the touting of play as evidence of the impressive mental powers of the octopus also seems premature.

Whoa, now!  Before I go making assertions like this, I should look at the research, right?  Good call.  Let's see what the vast scientific library that is the internet can teach us about the play-like behavior of octopuses.

I'll focus on Kuba et al. (2006), a recent study that was done to examine putative play behavior in O. vulgaris.  In this study, the authors exposed octopuses to stimuli made out of Lego blocks for half an hour at a time repeatedly over a period of 7 days and scored the octopuses reactions to the objects.  The authors' scoring system is illustrated below (this if Figure 1 from the paper.) 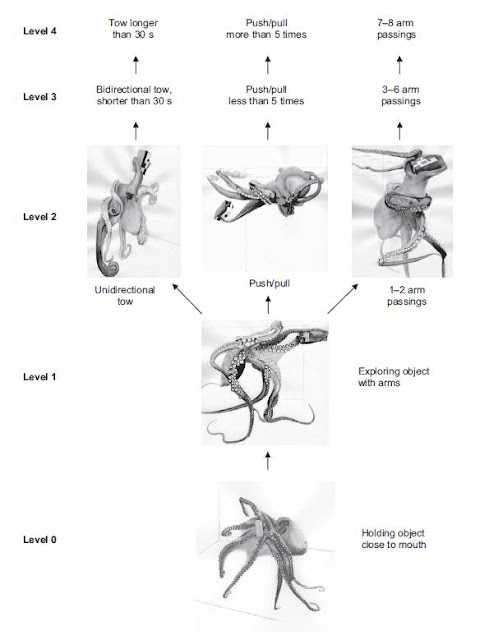 As you can see, level 3 (which the authors describe as "play-like") and level 4 (which the authors call "play") involve repeatedly manipulating non-food objects in complex, non-stereotyped ways for a significant amount of time.  Out of 14 (wild-caught) subjects, object manipulation that was scored at level 3 was observed in 9 subjects, and object manipulation that was scored at level 4 was observed in one subject.  There was no difference of age or hunger state in this behavior (young and old octopuses showed the same sorts of behavior, as did hungry and sated octopuses.)  Play-like behaviors tended to occur after several days of presentation of the stimulus, suggesting that this was not merely exploratory behavior, which appeared to decrease during the first few days of exposure (as the octopuses presumably got used to the presence of the stimuli in their tanks.)

By this point, I tentatively buy the characterization of these behaviors as "play" - they don't appear to serve any purpose for the octopus, who is clearly not simply confusing the objects with food.  They are exhibited after the octopus has presumably had ample time to learn that they do not represent a threat.  The behaviors do not appear to clearly belong to any other class of behavior (except perhaps tactile exploratory behavior.)  As I said before, however, using the existence of these behaviors to argue for the intelligence of the octopus seems premature to me.  For one, the significance of these behaviors in the wild is not well understood - they must confer some survival utility, but they do not appear to be disproportionately expressed in young, rapidly developing octopuses as they are in mammalian young, and so are unlikely to contribute to neurodevelopment in the same way that play in mammals (especially social mammals) is thought to.  We know that play in social mammals (like humans, some apes, and rats) serves a variety of functions in development - to establish dominance hierarchies, to develop skills for living within social organizations, to learn hunting and food-gathering behaviors, to help develop motor coordination, etc.  We have comparatively little sense of the importance of play in the life of an octopus, and so it is hard to know what play-like behavior means in the context of octopus cognition.

Because we know that play is very important to the cognitive function of mammals I mentioned previously (more properly, we know that disrupting play behavior causes deficits in behaviors that depend on play to develop,) we can claim that play is part of a group of behaviors that make manifest the intelligence of these animals.  Without knowing what play-like behavior does for an octopus, it's hard to say whether it implies an analogous intelligence in these animals.  It might be explained in many cases as a simple extension of exploratory behavior.  As a foraging predator, it makes sense that O. vulgaris would be served well by repeated, thorough explorations of the same object, which mobile and semi-mobile prey would presumably periodically be found on.  This behavior might be explained as part of a foraging strategy that is somewhat impervious to associative learning, and so violate the criteria that we use to classify a behavior as play all together.

My discussion thus far has accepted the hypothesis that behavior classifiable as play occurs regularly in the octopus, and thus needs to be explained in terms of its adaptive utility to the animal.  Based on the previously summarized paper, however, clear play-like behavior in the octopus appears to be pretty rare.  On the 5th day of the experiment, when play-like behavior peaked, 444 interactions with the stimuli were observed.  Out of these, 13% qualified as level 2 (they involved manipulation beyond very basic exploration of the object with the arms,) 0.9% were scored as play-like, and a single observation (0.02% of the total observations) was scored as being definitively "play".  I think this was a well-designed study, but the results don't convince me that play (as defined by the authors) is terribly important in the lives of octopuses, and might just as well represent a rare, specific type of interaction that they have with unusual stimuli in a laboratory environment.

I realize that I have been sort of hard on this study.  I don't want to imply that octopuses are not remarkable animals that are capable of many things one wouldn't expect from a mollusc.  I do think, however, that it pays to be very skeptical about the use of the terms "play" and "intelligence".  Both of these are concepts that we understand primarily by analogy to our experience of them as humans.  We know that social play in vertebrates is indeed play (even the scientists among us) because we know what a play fight feels like, and understand intuitively how it differs from a real fight.  We can extend this to behaviors that we see in animals (with more or less accuracy, depending on the situation.)  We know what intelligence means (or we think we do) because we have expectations of how people should function, and we can draw analogies to other vertebrates who have the same sort of behavioral flexibility and environmental demands that we do.  One might dismiss this as unscientific, but we have pretty good evidence that the neural structures that are responsible for a variety of emotions and types of behaviors are conserved in some form across species (in mammals at least.)   Thus, we can be somewhat comfortable in our understanding of the role of play in a rat's cognitive life because, at a pretty complex level of structure and function, they have essentially the same machinery in their head that we do.  It's a bit less convincing to use the same anthropomorphic logic to justify associating what looks like play behavior in an octopus with the "intelligence" that we suspect goes along with play behavior in vertebrates.  This is because the existence of analogous neural substrates and their accompanying cognitive functions (emotions, hedonic value, etc.) is not clear.  It strikes me as somewhat mistaken that we would use psychological constructs that were created to describe human behavior such as "play" and "problem-solving" to describe cephalopod behavior, though we do it even when they appear to be a poor fit to the behavior in question.

As Jennifer Mather points out in her quote in the Boston Globe article: “We’re smart and the octopus is smart, but octopus intelligence just can’t be related to our intelligence.”  This I have to agree with.  Just because we can call a behavior something that sounds familiar (in this case, "play") doesn't mean that we've explained it, even though it might appear this way.  I think that octopuses are fascinating and astounding creatures that exhibit very interesting behaviors; I'm just not quite convinced that they play.