What the cuttlefish sees that you don't

I thought I'd mix things up a little bit and take a look at some research on the sensory abilities of cuttlefish.  Specifically, I'd like to take a look at an aspect of cuttlefish vision that has shown up in the literature recently (it's actually one of the few threads of cuttlefish research that seems to be active at the moment - the other ones I've noticed are memory and fishery ecology and management): the ability of cuttlefish to perceive polarized light.  Polarized light is composed of photons that are all oscillating in the same plane - we cannot sense the polarization of light, but it seems to play some role in the lives of cephalopods and some other animals.  For more info on polarized light, check out this explanation of polarization.
It has been known that cephalopods can respond to polarized light for some time - Wells did the work showing that octopuses can detect polarized light in the 1960's, and it's been studied in fits and spurts since then.  In the late 1990's and early 2000's (from what I can tell,) it became a relatively hot topic among researchers who study animal communication, because it appeared as if cuttlefish might be able to use polarized light for some sort of intraspecific communication.  A good though somewhat dated review of the topic is Shashar et al's Polarization Vision in Cuttlefish - a Concealed Communication Channel? (1996).

How can cephalopods see polarized light?  It turns out that their photoreceptors are orientated at a variety of angles, so that incoming light will cause the most stimulation in photoreceptors that are oriented the "right" way.  In unpolarized light, all of the cells would be pretty much equally stimulated - nothing unusual happens here.  Upon being hit by polarized light, though, a specific population of retinal cells (those that are oriented in the proper direction) will be activated, and the animal will be able to see the polarization of light. 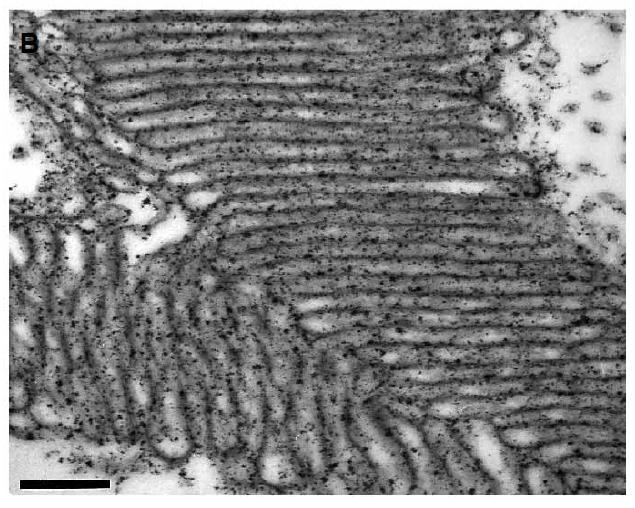 This is an image of cuttlefish (S. officinalis) photoreceptors (From Shashar et al 1996.)  The lines are folds in the photoreceptor cells called microvilli.  Notice how the two adjacent cells have microvilli at a right angle to each other - this is what allows cephalopods to see the difference between polarized and non-polarized light.
Detecting polarization can help a creature in a lot of ways.  In a basic sense, it almost always helps an animal (especially one who, like the cuttlefish, is both a predator and a prey item) to have as much information about the environment.  If sensing polarization allows the cuttlefish to know more about its environment at any given time, it's already a huge advantage.  In fact, it has been shown that the perception of polarized light probably helps cuttlefish to catch certain prey that is difficult to see otherwise (see Shashar et al 2000.)  But I mentioned the possibility of communication through polarized light - how does that work?

It turns out that iridophores, organs in the skin of cephalopods that reflect light, polarize that light to some extent.  The anatomy of iridophores is such that they preferentially reflect light polarized in a certain plane.  It is known that cephalopods, especially cuttlefish, have wonderful neural control over the pigment organs in their skin, which allows them to display such a dazzling array of colors and patterns.  Cuttlefish might be able to manipulate the polarizing properties of their iridophores, adding another layer of complexity to their body patterns.  Importantly, however, this would be a type of display that not everybody in the sea could perceive.  Shashar's theory is that cuttlefish might use polarized light as a type of social signal, while still being able to maintain the camoflauge which is key to avoiding being eaten.

Shashar and friends did a few experiments to test this hypothesis: first, they observed cuttlefish during a variety of behaviors, and found that the polarization of light being reflected from the cuttlefish's arms varied with different behaviors in much the same way as their patterns of coloration.  Polarized light is reflected from stripes on the arms and the area around the eye, as seen in this image from a review on the use of polarized light by cuttlefish by Mathger et al (2009): 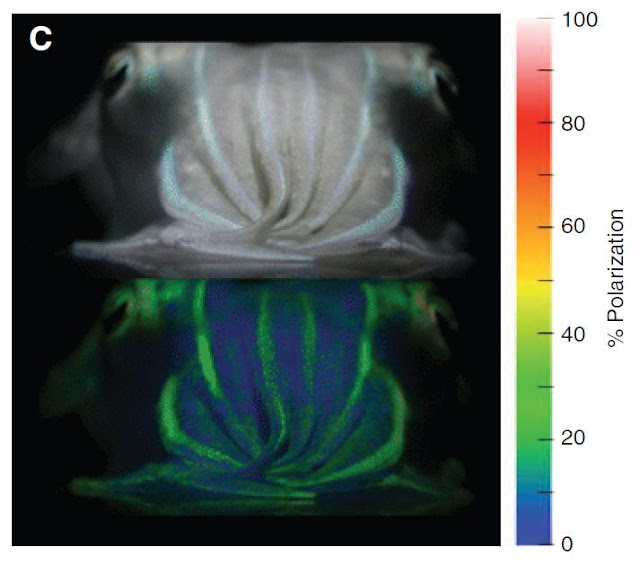 The top image is a cuttlefish as seen by the human eye. The bottom image has been given false color, so that areas which reflect polarized light show up as green.  On an unrelated note, cuttlefish sure are cute.

In addition to discovering the patterns of reflection of polarized light by cuttlefish skin, the authors found that cuttlefish respond differently to their own reflections when they view them through a filter that screens out polarized light.  Specifically, they found that cuttlefish responded less noticibly to the disrupted image.  While the authors declare that these findings are "fully consistent with the hypothesis that cuttlefish use controllable polarization patterns for intraspecific communication," they are also consistent with the more parsimonious explanation that cuttlefish don't respond to any stimulus made of non-polarized light as strongly as they do when it is at least partially polarized.  While the theoretical argument presented in this paper is interesting, I think it's a bit too eager for what the data show.

Fast-forward to 2004: Boal et al. published a study called Behavioral evidence for intraspecific signalling with achromatic and polarized light by cuttlefish.  In this study, they exposed cuttlefish (S. officinalis) to conspecifics (that is, other cuttlefish) through either a clear or a polarized light-blocking barrier.  They found that only females responded differentially to conspecifics behind the polarization-distorting barrier, not responding to them at all (cuttlefish confronting each other unexpectedly often show some sort of postural and color change.)  This was the only significant result that they found, and it is ambiguous in its interpretation.  Again, it might simply be that a non-polarized stimulus is not very interesting to an animal who is used to seeing a world of polarized light.

So, do cuttlefish use polarized light to communicate?  I'm not convinced.  It seems as if everybody's hoping that it's true, but there's not any good data showing it to be so.  I can't sum it up any better than Mathger et al. did in their 2009 review: