Serotonin in the octopus learning system.

(Note: I apologize if this post seems jargon-ey.  I've tried to explain or reference any hard to get terms, but I do assume that readers know the very basics of neural functioning.  If you need a primer on this, check out wikipedia's page on neurons or this great tutorial.  Feel free to post in the comments if there's anything you want explained more thoroughly, and I'll give it a crack.)

The Octopus research group in Jerusalem is back with a paper in the August issue of Neuroscience about the function of serotonin in the octopus vertical lobe, Serotonin is a facilitatory neuromodulator of synaptic transmission and “reinforces” long-term potentiation induction in the vertical lobe of Octopus vulgaris.  I'm very excited to blog about this paper - it's the very first time in my short blogging career that I've gotten to cover a study as it was coming out!  You can read my other posts about their work here and here (that second one has a basic description of the technique of stimulation-induced LTP, which I'll be very brief with here.)

Basically, LTP (long-term potentiation) is one of the mechanisms by which neurons are thought to adjust how they connect to each other during the process of learning - specifically, they become stronger (or potentiated,) meaning that signals are carried across the synapse more effectively.  The authors of this paper use a technique by which they induce LTP in synapses in the octopus vertical lobe (a structure thought to be involved in learning and memory) and study the effects of serotonin (also called 5-HT, which is short for 5-hydroxytryptamine, the terminology I'll be using from now on) on the properties of the induced LTP.  Presumably, this can tell us something about the function of 5-HT in the normal functioning of the vertical lobe, although this point is very debatable.

Why look at 5-HT?  Well, for starters, it's one of the big neurotransmitters these days (along with such illustrious nearly-lay-term chemicals as dopamine, norepinephrine, GABA and glutamate.)  You hardly need to have a specific reason to study it these days because it's involved in pretty much every process that contemporary neurobiology cares about: consumptive behavior, mood and depression, social cognition, the action of addictive drugs.  More than that, though, it's conserved across all bilaterians, the group of bilaterally symmetrical animals including people, the rest of the vertebrates, the insects, and, among many others, the molluscs!  If there is any neurotransmitter that is interesting to study comparatively, it's 5-HT, as it's been shown to be involved in learning in animals as distantly related to each other as sea slugs, rats, humans, and (now) cephalopods.  If we learn how 5-HT does its job in a wide variety of animals, it will help us understand how neurotransmitters function within nervous systems in general.  This is, we will hopefully agree, a Good Thing.

The authors begin with the hypothesis that, as has been shown in Aplysia (a beautiful little sea slug who is relatively widely studied in neuroscience,) 5-HT probably has a role in the modulation of LTP rather than inducing it directly, making it a putative neuromodulator.  It is not hard to imagine how this might be a good thing to have in a memory system.  Let's pretend that our animals has just been injured, or that it has just found a great big source of food.  All of these events call for a general upregulation in the formation of memories, since remembering what happened around these events will help the animal repeat or avoid them in the future, depending on whether they were good or bad.  If a chemical can increase the amount of LTP (a process thought to be involved in learning,) it would make sense that it might be selectively secreted or expressed during times when the animal's memory system needs to pay attention to what's going on, and not when there is nothing of consequence happening.  This is an extremely limited view of the role of neuromodulators in learning, but it illustrates the principal as well as I know how to.  In short, neuromodulators, while not responsible for neurotransmission and plasticity themselves, have some effect on it.  This sort of effect is one of the things that allows the great flexibility of neural systems, one of their key features.

In the first part of their study, the authors stained slices of the octopus vertical lobe for 5-HT, and then described what they say - this is good old fashioned neuroscience.  They found that 5-HT shows up in fibers from the medial superior frontal lobe (MSF) that innervate large areas of the vertical lobe.  The MSF is thought to be one of the main sources of input of sensory information to the vertical lobe, and this tract of fibers (known as the MSF-VL tract) is thought to be involved in the formation of sensory memories in the octopus, as per J. Z. Young's early lesion experiments in the octopus.  The authors note that this wide spread of 5-HT is typical of neuromodulators, supporting the idea that MSF neurons use 5-HT to modulate LTP in the vertical lobe.

In the second part of the study, the authors use a technique where they induce LTP in live slices of octopus brain (cool, right?) by repeatedly stimulating the axons running from the MSF to the vertical lobe.  They measure the "strength" of neurotransmission as fPSP's, or synaptic field potential, which is roughly an indicator of how much electrical activity is generated by activity in many synapses within a small area of the tissue.  I'll only summarize one of their several experiments here, because it is the one that really illustrates the neuromodulatory effect. 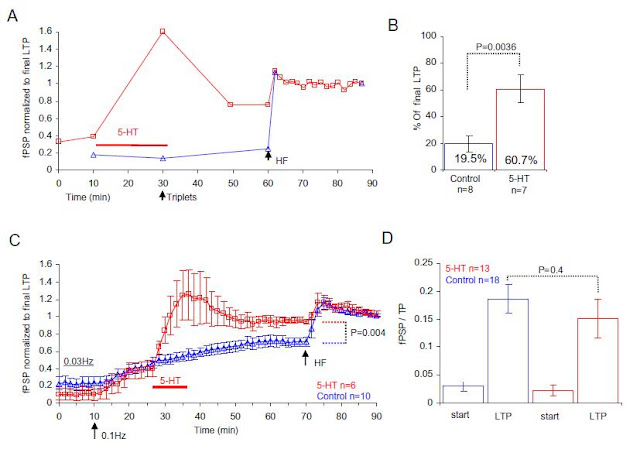 This figure shows the results of an experiment using induced LTP in octopus brain slices.  The experimenters stimulated the brain slices along the MSF-VL tract and recorded the resultant electrical activity in the VL.  Let's start with the first graph.  The y-axis shows the amount of activity recorded in the vertical lobe after a very small electrical stimulation (this is what each data point is.)  The x-axis shows the time from the beginning of the experiment.  At about 30 minutes, MSF-VL neurons were stimulated with a "triplet", which consisted of three pulses in quick succession.  As we can see in the control preparation (the blue line,) this w pas not enough to induce LTP, which would be evident as an increase in the field potential.  In a preparation treated with 5-HT, however, this stimulation was enough to elicit some LTP, which is apparent as a stable elevation of the recorded field potential at times 50 and 60 minutes.  After 60 minutes, each preparation was subject to high-frequency stimulation, which caused maximal LTP in both cases.   The bar graph next to it (B) shows the results of multiple experiments, showing that before high-frequency stimulation, the treatment with 5-HT caused an increase in the LTP resulting from the triple-pulse, indicating that the presence of 5-HT made MSF-VL synapses prone to undergo LTP.  The second line graph (C) shows the results of a set of similar experiments, except that the stimulation was done once per minute.  As is apparent, treatment with 5-HT (shown by the red bar) increased the rate of LTP; however, as indicated in the adjacent bar graph (D), it did not increase the maximum amplitude of LTP.

It's important to remember that in the active nervous system, it's unlikely that synapses are ever stably at a maximal strength.  That increase in the rate of induction of LTP, modest though it may seem in this experiment, could be crucial in affecting the functioning of a memory system in a behaving animal.  In the "real world", the stimuli involved in learning are often only present for a short time, and the state of any particular synapse in the nervous system is determined by an incredibly complex set of chemical factors.  Neuromodulatory activity (like that argued for in this paper) provides a sensitive mechanism by which the functioning of a neural system could be finely coordinated, allowing the integration of a variety of information into one system that can make a timely decision about whether an action was good enough to repeat or bad enough to avoid in the future.

For convenience's sake, I skipped a variety of other interesting experiments that the authors did, and I encourage you to get the paper yourself and read it, if you can.  I very much like this type of research, and I like the challenge that blogging about it presents.  Anyways, I hope you've enjoyed this as much as I have!

Shomrat T, Feinstein N, Klein M, & Hochner B (2010). Serotonin is a facilitatory neuromodulator of synaptic transmission and "reinforces" long-term potentiation induction in the vertical lobe of Octopus vulgaris. Neuroscience, 169 (1), 52-64 PMID: 20433903
Posted by Mike Mike at 10:00 AM