A while back, I wrote a post about short and long term memory processes in cephalopods.  I wrote then that there is good evidence for a dissociation of short and long term memory process in cephalopods, but that this isn't a good basis (alone) for inferring the presence of consciousness, or in the case of arguments about animal's rights, the capacity to suffer (which, I guess, usually comes along with being conscious.)  I stand by this; I just want to cover a neat study that I missed while writing that post: Lesions of the vertical lobe impair visual discrimination learning by observation in Octopus vulgaris by Fiorito and Chichery (1995).  This uses an observational learning task that Fiorito and Scotto used in their 1992 article on observational learning in the octopus, where the test octopus watches another octopus perform a visual discrimination, and then is tested on that discrimination.  Octopuses can (apparently) learn a simple task by watching another octopus do the task pretty well, and so in their 1995 paper, Fiorito and Chichery examine the effect of brain lesions to the vertical lobe of O. vulgaris on their retention of this task, as well as a discrimination learned through the more traditional method of reward and aversion (in the case of the octopus, some fish for a correct answer and a small electric shock for an incorrect answer, usually.)

The vertical lobe is one of many lobes in the cephalopod brain.  It sits above the oesophagus, and receives input from the sensory systems of the arms and visual information from the optic lobes.  It is classically associated with learning, so that removal of the vertical lobe results rather reliably in deficits in the learning of a discrimination task.  When asking questions about the presence of short and long term memory processes, one has to differentiate between the two.  Thus, Fiorito and Chichery test their animals at two time points, 1.5 hours after training and 24 hours after training.  It's important to note that this 24 hours would not nearly qualify as long-term in human memory, where memories can be stored for many years.  In the octopus, tactile memories have only been shown to be retained for up to 50 days, although interestingly enough, the removal of the vertical lobe after a task has been learned appears to improve memory retention (Sanders, 1970.)  I'll get back to this.

On to the procedure!  Fiorito and Chichery trained one group of octopuses to disciminate between a white ball and a red ball - specifically, to attack the white ball and not the red ball.  Then, another group (which had been operated on, some having their vertical lobe partially removed and others having a sham surgery) watched the first group perform the discrimination for 4 trials.  They were then tested, to see if they could remember the discrimination at 1.5 hours after training and at 24 hours after training.  The results are shown below: 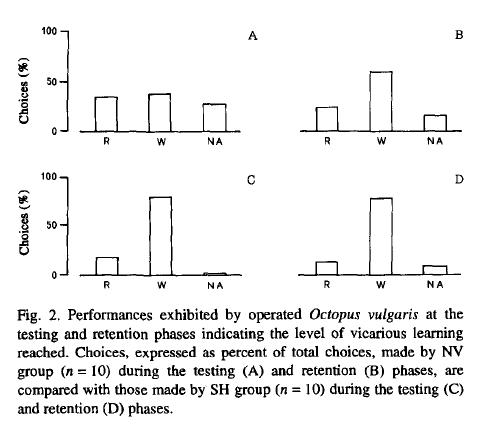 This is a bit of an odd way of showing the data (I would have done a line graph, myself.)  First of all, the bars in each graph show how many of the tested octopuses chose which ball, the red (R) or the white (W).  NA is used for trials in which the octopuses did not make a valid response (ie. did not attack either ball.)  The white ball can be thought of as the "correct" choice.  The top row of graphs shows animals with the vertical lobe removed, and the bottom row shows animals who received a sham surgery.  The first column of graphs shows the 1.5 hour test, and the second column shows the 24 hour test.  The sham-operated group looks much as one might expect them to - they learn, and they retain the learning.  The lesioned group is strikingly impaired.  At 1.5 hours, it's clear that the removal of the vertical lobe has hurt performance, as these animals are performing at chance levels.  By 24 hours, however, they seem to have improved!  This is odd.  If we explain this by analogy to human learning processes, we would have to say that these octopuses formed a long-term memory of the task without forming a short-term memory of it first.  This indicates that "short-term" and "long-term" memory like what we talk about in mammals is not readily applicable to the description of learning in cephalopods.

Consider for a moment the results of Sanders (1970), who found that octopuses who learned a task and had their vertical lobes removed (unfortunately, I cannot find the full text of the paper at the moment and so I don't know the exact procedure) retained it better than those who had intact vertical lobes - that is, they retained it for a longer period of time.  If Fiorito and Chichery had tested their octopuses at longer intervals, we might expect that they would find the same results, with vertical lobe remove leading to a greatly delayed acquisition of the memory as well as a slower decay of the memory.  This strikes me as odd, as I do not believe that this can be shown to be the case with people.  In general, if people cannot remember something for a short time, they cannot thereafter remember it better after a long interval - it is simply gone from the system.  I may be wrong about this point (and please point out any counter-examples you know), but it seems to me that the memory of cephalopods doesn't correspond very cleanly to the "working memory-consolidation-long term memory" model that is used to describe human memory.

And why should it?  Cephalopods may not have memory that looks like ours, but they have highly developed memory systems that serve them well enough.  If anything, we should be excited that our theories of human memory cannot explain cephalopod memory very well; the more varieties of memory systems we have to study, the more we can learn about learning, period.

This paper is a big deal (theoretically speaking) for a reason besides its illustration of the role of the vertical lobe in the time course of memory.  Did you catch it?  The authors used an observational learning task.  That is, the octopuses being tested did not receive fish for the correct answer and shocks for the incorrect answer in the task.  They did the task (correctly, at that) without ever being rewarded or punished for it; instead, they learned how to do the task by watching another animal perform it.  When Fiorito and Scotto published a paper on observational learning in the octopus in 1992, people had a hard time swallowing it.  It simply did not make sense, critics contended, that octopuses, being such loners, would have the capacity for observational learning.  Why would they have evolved the capacity to be cooperatively social?  The fact that they can learn by observation is one of the arguments that proponents of cephalopod consciousness (that is, the idea that cephalopods have some form of conscious awareness) often cite this as evidence of their general powers of cognitive representation.  The octopuses are not being social, they're just being smart.  At some level, they appear to have a representation of themselves and other beings, enough that they can learn a simple task by observing another octopus do it.  In any case, replicating this finding adds some weight to Fiorito and Scotto's argument that octopuses can learn by observation.